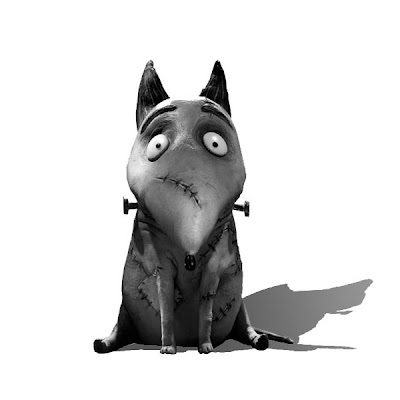 So now we've seen more of what director Tim Burton has in store for us come October...

And it's very appealing to me. If you've seen any old monster films from the 50's, like "Attack of the 50 ft. Woman," or a "Godzilla" film, then this trailer will make you giggle with delight. An innocence presided over these tales of terror that no longer applies. It was an attempt to entertain you and tell a story, not see how far they could gross you out. Despite paper thin plots in many cases, these film were decidedly more cerebral than most horror you see today.

Burton seemed totally at home here. As if he was among friends, or worshippers as some of the attendees made obvious. This stop-motion animated film looks like a labor of love for the director. It truly shows. I've only seen part of his original live-action short, but it appears that he's greatly expanded the story, and the characters are iconic and Burtonesque. This is the second in a two-picture deal with the Mouse, and I'm sure that if this is as successful as "Alice" they're going to want to continue the relationship.

If it's a hit, perhaps there will be "Bride of Frankenweenie" in a few years...
Posted by Honor Hunter at 5:48 PM