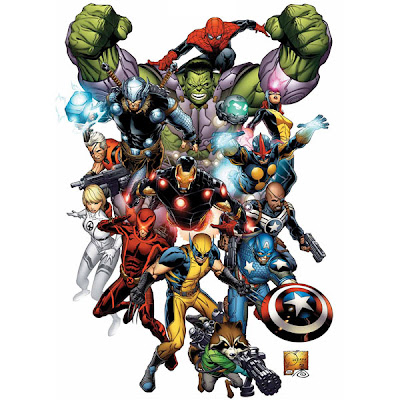 To be honest, I really didn't like the idea of DC Comics rebranding everything...

It seemed totally unnecessary and almost apologetic. There was nothing wrong with their characters or the linear trajectory on which those stories were headed. It almost felt like a reboot with the words, "We were wrong" plastered atop every issue.

But it's been a very big success for the former National Periodical Publications funny book maker. The teams that they've put together and the stories they've generated have been far stronger and popular that I would've thought.

And now, Marvel appears to be getting in the game.

The Disney sub-division has announced a new imprint entitled: "Marvel NOW" which focus on stories that will deviate from the normal line of stories. This will allow artists/writers to unshackle stories they would like to tell, but are limited in publishing because of interference with the traditional canon of comic book lore. In a sense, it's an introduction to another Marvel Universe, the same way that Ultimates was as well.

Perhaps the studios will take note of this since they based so much of the MCU on that perspective...
Posted by Honor Hunter at 11:11 PM

"…stories that will deviate from the normal line of stories. … In a sense, it's an introduction to another Marvel Universe, the same way that Ultimates was as well."

Where did you get that from? Looks like it's full-on mainstream Marvel Universe to me.

I think this is more in line with DC's "Elseworlds" series from the mid-90s, which itself was inspired by Marvel's "What If" series back in the 70s.

I don't see these one-shot re-imaginings as being quite the same as a full reboot of some characters a-la DC's typical restarts like Crisis, 52, etc.

MARVEL NOW is not a separate imprint or a new universe. These new series will all be set in the regular Marvel Universe. Trust me, I'm writing one of them.