The power of two, three or more systems... 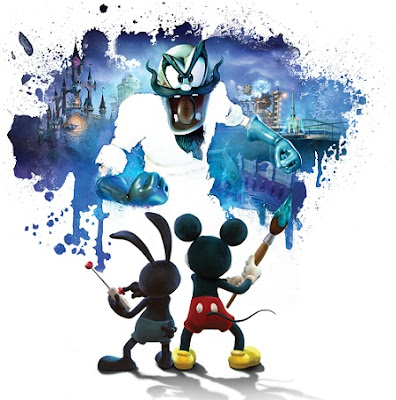 A little note as I head off to San Diego...

I will be attending as many panels as I can, but being as I won't be able to clone myself, there will be several that I don't get to attend. This sadly, is one of them.

Warren Spector is coming to Comic Con this Sunday at 1:00 pm in Room 25 ABC for a panel on his "Epic Mickey 2" sequel. He'll be there with Peter David, award-winning comic writer and author of the upcoming Disney Epic Mickey 2 Graphic Novel and Marv Wolfman, author of the comic book version of the game (and the man that got me reading Teen Titans a kid). Unfortunately I have other plans for that day and can't make it. But if you're going, perhaps you can.

One of the mistakes made on the original was making it only available on the Wii. This time, anyone on any system should be able to play it. And with this, we get to expose the world to more Oswald the Lucky Rabbit. Hmmm, could the Mouse be gradually getting the public used to him for an ulterior motive? Something more in the future? Time will tell. If you haven't seen anything about this sequel, take a look at this opening for a bit of story on where the tale continues.

Now, if I was there for the panel, I'd be asking Warren about that Ducktales game he wants to do...
Posted by Honor Hunter at 6:47 AM

Today, Disney Games gave out free Oswald hats at the corner of the Hard Rock, Warren Spektor was signing them too.. So cool!

I think Disney makes very careful research before deciding which consoles to put their games on. While it would be nice if they made the game available for other platforms, I think the bulk of the target demographic owns a Wii.

I disagree with your assessment that having the first game a Wii exclusive was a mistake. Playstation gets the main Kingdom Hearts games and nobody crys foul about that. I actually liked having a good Disney video game only for the Wii.