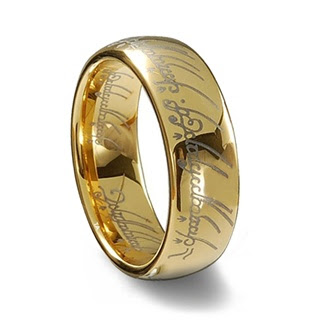 Warner's panel was the one to be at this day, and this was a big reason why...

I just finished reading "The Hobbit" for the second time a couple weeks ago. So it's going to be interesting seeing this movie version of the book through Peter Jackson's eyes and not my own. After seeing this panel, I have to say that I can't wait for the Holidays. This looks like a gift left under my tree that I've waited a long, long time to open.

Peter Jackson is a man that understands this fanbase. He started doing those production blogs back in the 90's for "Lord of the Rings" way before other film makers/studios. Jackson understood he needed to get people, particularly fans, interested in this project. And people today do these kind of thing without thinking about it. So when Jackson walked out, he was holding his phone and recording the fan reaction for a new update blog on the film for people that didn't get to come to Comic-Com.

Jackson brought out the rest of the panel which included his co-writer and producer Phillipa Boyens, and then the rest of the cast joined them. He showed a large amount of footage from the film(s), including some scenes that take place in the second film. The bulk of scenes consisted of Bilbo and the Dwarfs arguing what they were going to do to get the treasure that Smaug guarded. Several other scenes/clips were shown, but the best of these was the meeting between Bilbo and Gollum. Sadly, the footage was all shown in 24fps, so we'll have to wait until the holidays to get a look at 48fps in all its glory.

There were the typical questions about things, but one asked about him possibly adapting "The Silmarillion" and Jackson honestly answering that the rights were owned by the Tolkein Estate (which I knew) and that they weren't too happy with his interpretation of the books (which I didn't know).

All in all, the film looks like a great continuation of the Middle Earth Universe, but it's not got the more dark, and somber tone of the LOTR trilogy. I can't wait to see this, but I also wonder in the back of my mind how different it is from the films that Guillermo del Toro had planned.

But really, we can never go there and back again...

It appears that Peter Jackson is trying to get Warner Bros. to fund the filming of additional material which could wind up making the second film a two-parter. That would turn this in to a trilogy of films spread out over 2012, 2013 and 2014. If that doesn't happen, then it leaves a lot of footage that could be available for the Extended Editions of The Hobbit. Warner Suits will have to decide if they want to continue this series another year. I'm sure it's a tempting decision they have to make with all those dollar signs floating around in the air.
Posted by Honor Hunter at 7:37 PM

If you haven't already read it, here's a link to an interesting interview with Christopher Tolkien that gives more insight into his thoughts on the films and universe beyond the books.