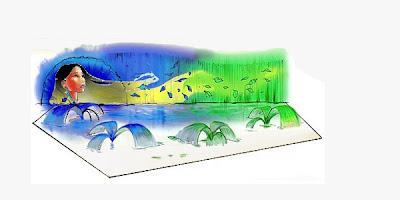 I've read a lot of stories out there about DCA's new water show and Blue Sky is hear to set the record straight on a few things...

For some time now, it's been thought and even planned that the new "World of Color" show would be the closing event at the park. Several rides would shut down just prior to the show and then there would be this spectacular visual presentation for twenty-five minutes to close out the night. Sort of the way the Electrical Parade ended the night for the last few years, but in a more dazzling way.

Well, it's still going to end the night. Nothing about that has changed. But the timing has changed. It's going to happen a little later. The reason for this is that you don't want to have two shows that close together, so you can likely expect the Disneyland Resort to increase the parks closing hours come spring of 2010. That's right, I said TWO SHOWS. It appears that the Suits in Anaheim/Burbank have decided to deliver two shows so as to get the most for their buck and to make sure that crowd control doesn't get beyond their control with everyone wanting to see this grand water presentation.

And I know some out there have talked about how large Fantasmics! cast of characters are and how they were looking to have a show that didn't involve as many people so they could save money. I guess they didn't get the memo about the number of Cast Members they're planning on needing for this night time extravaganza. There are going to be approximately ninety Cast Members available for logistics and crowd control for this event. That 90, as in nine and zero. The parades and other activities take up a quarter, sometimes a third of that. So expect this to be a very big show with a very big presence. The Mouse believes it has a game changer on its hands here. Starting next year, there are going to be major reasons for guest to actually enter the Second Gate. Changes are finally coming starting in 2010. Noticeable changes.

90 CMs, but that is to handle the show and control 9000 guests, not unreasonable.

Really excited about this. My first visit out to Disneyland and this. Just need to start planning when I'm going to go!!

There's a good youtube video with one of the Imagineers talking about the show. It is going to be amazing!

thereare any room for 3rd gates and beyound at disneyland ?

they should learn from this plan of crowd control, and immedietelly put that into action for crowd control of Fantasmic (especially during the first few months of the arrival of Murphy. I just can't wait for this extravegent(don't know how to spell it)water show. I always knew they would need to shows a night.

You don't know how to spell "Two" either.

Wow, why so tense dude?

As for World of Color... Awesome, 2 shows!!! But do the rides open between the 2 shows, or are they closed for good? I'm sure the carousel, Midway Mania, and Goofys Sky School will remain open during this. Honor, do you know?

The Performer is the show.

Is it possible to project 3D onto water screens? i.e. does it work with glasses? Would there be any effect?

now there are room for 4th gates at disneyland ?

^only if Disney buys and bulldozed all of Harbor Blvd. But still, there's not that much room.

I'm guessing Disneyland will have 3 gates. But that's still a lot to do. I'm hoping a possible 3rd park could be Westcot.