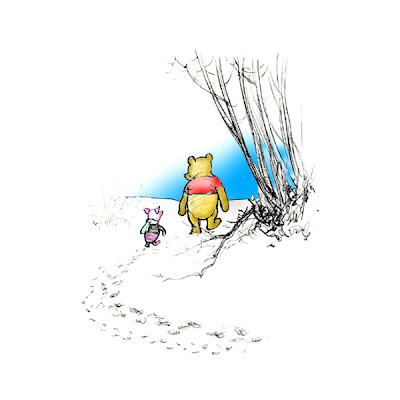 When I mentioned at the beginning of the month that there were things about Disney Animation's 2011's release I was being honest...

I had several people e-mail me that I was lying and just was trying to tease them and yada, yada, yada. You get the picture. Well, I did and still do have things I can't mention, but now there is something I was referring to that I can now talk about. It's been mentioned on a couple sites, like the Animation Guild and a couple others, so I feel it's safe to open up about it.

You remember how we originally said that this new film would be a mixture of new stories and at least one old tale from the original shorts? Kind of like Fantasia 2000 used the Sorcerer's Apprentice with several new segments was the thinking originally going in. Things tend to evolve and it appears now the Higher-Ups tend to like the way the story is going so much that there's not going to be a bridge short/chapter from the original film. This one will stand on it's own and include all original material. Much of it will be based on A.A. Milne's work in the classic novels that wasn't all covered by the three Disney produced shorts: "Winnie the Pooh and the Honey Tree," "Winnie the Pooh and the Blustery Day," and "Winnie the Pooh and Tigger Too." So now we've got something new and old to look forward to. As for the other stuff about this release, I just have to hold off on anything else at this time.

We've got over two years and I'm sure you'll be hearing more about it as the new journey to the 100 Acre Woods gets closer...
Posted by Honor Hunter at 12:02 AM

"I had several people e-mail me that I was lying and just was trying to tease them and yada, yada, yada. You get the picture."

Yeah, well that's the Internet crowd for ya.

Thanks for the info Honor.
It will be interesting to see a new tale from the Pooh characters that isn't about selling a new character.

Was Winnie the Pooh and a Day for Eeyore produced by Disney?

"...a Day for Eeyore" was actually produced for Disney by an outside animation studio (the name escapes me at the time).

I am looking towards this Poh movie nore than some of the other stuff cong out...as a pure nostalgist of the "good ol days"