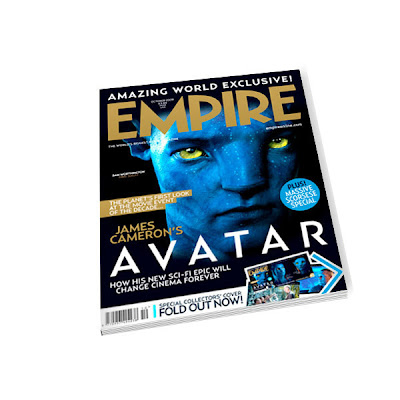 For those that are interested in James Cameron's "Avatar" film...

This coming week, Empire Magazine has a new issue out that has an article with a lot of photos that haven't been seen yet of 20th Century Fox's Christmas/Holiday release. I know there's been a lot of criticism of the teaser trailer that premiered last week. But the majority of those that went to the Avatar Day screenings left impressed. Myself included. It may not be a revelation/game changer, but it will be an event film with images and scenes like you've never seen before. Many bet against Cameron when he made "Titanic" over a decade ago. No one felt it would make the 200 million dollar budget back. They were all wrong. Badly wrong. Could they be again?

Looks like a Thundercat Raped a Smurf and this was the offspring.

Seen the trailer; seen the photos, and sorry Empire, this film is not going to "change cinema forever".

"It may not be a revelation/game changer, but it will be an event film with images and scenes like you've never seen before."

Really? Tell that to the creators of Delgo.

Word on the street is they're probably going to sue. Good call, actually. The similarities seem more than coincidental:

I've seen the "similarities" and they don't have a leg to stand on unless they've somehow copyrighted that a science fiction story can't include many elements from hundreds of sci-fi novels, films and TV shows.

The only think they're hoping is that they'll get some kind of settlement to help make up for the huge pile of cash they lost after that thing opened.

The result will be them losing even more cash. Go over and see Jerry Beck at Cartoon Brew and his thoughts about it.

This doesn't even mention the fact that Cameron wrote the story back in 1995, but didn't have the technology to film it so he put it away till the effects caught up. And just so you know, it was copyrighted back then too. Sorry, but there is nothing to see here.

I've also seen those 16 minutes of "Avatar" footage and they are nothing alike.

It would be like comparing the 70's "Land of the Lost" TV show to "Jurassic Park." In fact, during some of the scenes I watched, that's exactly the feeling you were getting. Like the feelings you got while watching that the first time back in 1993.

I'm not betting against Cameron. Others had done films about "Titanic" before him, but no one can even imagine them now.