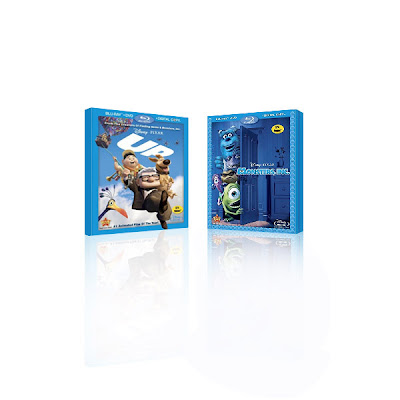 Now here's a nice present the Lamp has announced today...

November 10th is when the home video release of Pixar's "Up" will happen so get your bank accounts in order so that you'll be able to purchase it on that date. Along with that title, on the same day the Monsters' Inc. DVD/Blu-Ray will be coming out so expect a great double billing. The Up dics will come in several versions. A single-disc copy, a two-disc deluxe DVD and a four-disc Blu-Ray edition. Obviously the Blu-Ray will include all the bells and whistles (The Film, Partly Cloudy short, Dug's Special Mission short, Adventure Is Out There documentary, audio commentary, Alternate Endings collection: The Many Endings of Muntz, Cine-Explore/BonusView, Global Guardian Badge, Geography games, Eight documentaries, BD-Live and a digital copy).

The Monsters' Inc. disc is essentially the one that was put on the back burner and delayed a while back. Like the Blu-Ray of Up, the Blu-Ray of Monsters goes all out with no stops with a three disc collection. The Mouse more than any other entertainment company is really trying to get people to switch over to Blu-Ray.

this post is very useful and very interesting to read, Really this blog is nice information about blu ray techniques,Keep it up.

Wow, sounds like a lot of great stuff on that Up four-disc edition.

Buying media is so yesterday. Don't do it. Another media type will come along and completely wipe out your investment. Subscribe to a service and watch all you want and when you want. You might not get the extras from the Blue Ray or DVD media, but usually it isn't necessary.

"You might not get the extras from the Blue Ray or DVD media, but usually it isn't necessary."

Which is precisely the point you're missing. The extras are the reason to buy the discs in the first place.

Plus there's something to owning a movie you really love and enjoy and being able to watch it anytime you want and not have to wait for it to come in the mail. This is especially true if you have kids who will want to be able to watch anytime they want without having to wait for it to arrive. Plus when you own the media it allows you to take it over to a friend's house to watch at any time and share it with others.

whoever dontbuymedia is they are an idiot. Extras are the reason I purchase films i love..... Sounds like someone who doesn't care about the movie other than ranting about it after the film is over. There's a lot more to a movie than just the film. Clearly they have never sat through credits before.

Wow, it sounds from the comments that school holidays are still on.

Anyway, can we argue about Eisner some more, or shall we wait for the next post?

Wow. I didn't expect such a response. Go ahead. It's your money. What the heck!!!

Disney movies are coming out very quickly, at least 2 animated movies a year. Gosh, a fortune goes from your pocket to Disney. Yeah, that's very smart.

It's called capitalism. Sorry you aren't a fan of it.

No one forces you to buy a film from Disney or anyone else. No one puts a gun to your head. They have to create something that causes you to want to purchase it. To pay for it. There is nothing wrong with someone doing that. And people aren't stupid to want to pay for something they like. Maybe if you create something people want you'll get rich off of it? And I won't be angry at you for it.

In ten years, blue ray will be gone and your whole collection will have to be upgraded. Or not. How about that? Or maybe it doesn't matter.

Then buy another commemorative edition or a limited collection disc. Waste your money. It's yours, right?

Or just watch it on hulu or disney.com or netflix. And move on to the next great movie.

Some people want to watch it. Some want to own it. I don't make judgements about either.

If you believe it, Disney will be one happy seller of fantasy.

No one truly owns movies except for the media company. Like all intellectual property, you own the license to use the officially bought copy. The purchase should be considered a temporary investment.

I'm not against buying it if you know what you're doing. It just seems like a complete waste to buy something you'll only appreciate for a short while. Ownership isn't what you think it is.

BTW, in music and movies, I'm down to the 3 generations. 8Track, to Cassettes/LPS, to CDS.
BetaMax/VHS to DVD to Blue Ray.

Dontbuymedia, I believe you have way TOO much time on your hands.

My response takes no time at all. Thanks for reading.