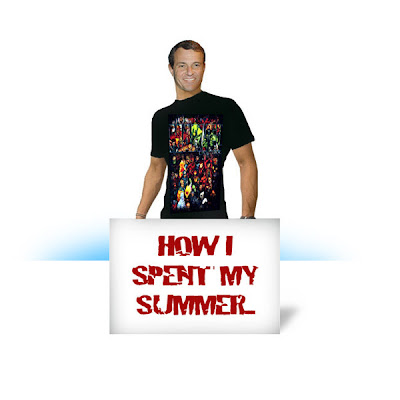 For those worried about the Mouse "Disneyfying" the Marvel Characters:

"We'll take a look and see, but the bottom line is we like what they've been doing so far," - Tom Staggs, Disney CFO

And about the meeting that John Lasseter had with Marvel Suits earlier last week:

And Staggs offering why the deal was good for Marvel:

"Disney stock is attractively priced and that's why it's important to Marvel," - Tom Staggs, Disney CFO

And if you want to see that Disney wants to be in charge of the characters:

"it clearly would be in our best interest if we ended up as the sole distributor," he said. "When you distribute your own films, the opportunity is even better." - Disney CEO, Bob Iger

Or on the future of handling the properties:

And when asked about meddling in on projects:

Marvel's CEO got in on the acquisition as well:

“Disney is the perfect home for Marvel’s fantastic library of characters given its proven ability to expand content creation and licensing businesses,” - Ike Perlmutter, Marvel CEO

Iger expressed his confindence in Marvel's current management as well:

“Ike Perlmutter and his team have done an impressive job of nurturing these properties and have created significant value. We are pleased to bring this talent and these great assets to Disney.” - Bob Iger, Disney CEO

One of the problems Disney has is that it appeals to girls more than boys, hence the Disney XD launch to try and bring in this important demographic:

“We’d like love to attract more boys, and we think Marvel’s skew is more in boys’ direction. Although there’s a universal appeal, we think, to a lot of their characters and a lot of their story. Just look at Spider-Man and Iron Man films. This is a great fit. But we obviously know Disney has a lot of products that are more girl-skewed than boy. And we’d like the opportunity to go after boys more aggressively.” - Bob Iger, Disney CEO

I want a Mickey dressed in Spiderman pajamas plush toy!

Coming soon, the comic event of the decade...

With Disney's long history of cenoring itself (Song of the South, Fantasia, etc.) you can be sure the days of graphic "adult" comics in the Marvelverse are over. Disney is a company that caters to "family values" so you better believe your favorite Marvel characters are going to be "sanitized" or at the very least toned down.

xavier, it's not like Marvel publish a lot that would need to be sanitized in the first place.
Disney is increasingly okay with older skewed entertainment through various brands.
Even then its only an issue if it carries the Disney name.

Punisher Max and perhaps Marvel Zombies might be pushing it. I doubt though that the comics will be introduced as "Walt Disney and Marvel Comics present.. Deadpool"

I have my concerns, but I don;t think it becomes conclusive that Marvel + Disney = Wolverine with daisies coming from his fists.

Ever heard of a division called Touchstone Pictures?

Disney will not censor Marvel to make it more "Disney" when they already have outlets to publish/distribute film/graphic novels.

There may be things to fear, but that is not one of them...

They need to change the Touchstome name to Suckheimer Pictures

if you spent as much time on coming up with creative entries as you do on photoshopping your cute little headlines each day then you would have more readership...

I will double what Honor said, I mean look at Miramax and films like Jay and Silent Bob Strike Back, or Dogma by Kevin Smith. Remember all the backlash those flicks got and Disney didn't back down in anyway.

"if you spent as much time on coming up with creative entries as you do on photoshopping your cute little headlines each day then you would have more readership..."

He has a point.

could have just left it alone. i shall return. :)