Making The Past Contemporary... 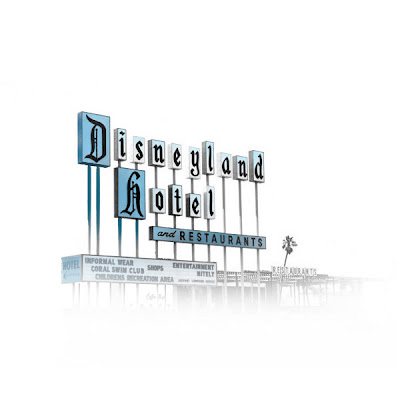 Tomorrow The Disneyland Hotel finally gets started on the renovation that it's needed for over a decade...

It's not the Mictorian/Victorian hotel concept that I love or even the fantasy theme that was proposed a few years ago, but it's going to much better, well themed experience once it's done in 2012. I think looking at it as a comparison to the Disneyland Hotels in Paris, Tokyo, Hong Kong or even Grand Floridian would be misdirected. The hotel theming it'll have, will be more in relation to The Contemporary at Walt Disney World. It's that kind of styling and thinking you need to approach it with if you want to objectively examine it.

The Dream Tower will be the first one to get this beautification and it should be done by summer, 2010, just in time for another tower to go under the knife, so to speak. It'll be a little under a year for each one to go through this process. Once the Extreme Makeover is done, so will be the makeover of the Disneyland Hotel. That would only leave the badly out of place and badly themed (in relation to the new Victorian themed pier) Paradise Pier Hotel. But for anything to be done to that hotel, the economy is going to have to pick up a bit. Now as for those other Disney hotels in the planning?

To be honest, I'd much rather see the Paradise Pier Hotel redone in the Micktorian style than the Disneyland Hotel (it would help tie it in to the Pier's new aesthetic). I also think it would be cool if the Disneyland Hotel was to be redone in a cross between contemporary and Googie-style architecture, as a throwback to the year it opened as well as to the direction they're taking with it now. Though that would only be if it was done tastefully, though.

Flipping through the Disneyland Hotel book, it is evident how much heart and ambition the thing had in its early days, when Jack Wrather (and Walt, presumably) aimed for this thing to be a success that would complement the Disneyland experience--not compete with it.

My first visit to the Disneyland Hotel was the summer of 1987. It certainly wasn't in its prime, but growing up on the east coast, with the "master planned" WDW resorts, I found the Disneyland Hotel to be both funky and refreshing in its mix of offerings--everything from high rise towers to Japanese Gardens to Sgt Preston's Dinner Show.

It was weird to be sure and not what it could be. Disney should be investing in the property, but not by gussying the place up with teh now ubiquitous "pixie dust." Disney should be in the business of finding the authentic core of a guest experience, and then exploiting that.

The revitalized Disneyland Hotel should offer and celebrate the best of a mid-century So. Cal Motor Inn, with a 21st century infrastructure in place to offer a superior visit. Instead, this turtle is just going to get the same "magical" makeup that the Mouse is hellbent on smearing over ever element in its dimensional entertainment empire.

How brilliant and clever and surprising.

I can't wait to book my visit at the Candy Cane Inn.

I second that agreement.

I'm hoping they do end up putting some shag art touches in the DLH... earlier I heard that was the look they were going for, and we haven't even seen any concept art for the lobby or exteriors yet.

Does anyone have a link to a blog or update of the pictures of the test room they did for the new hotel design?

Photo at the bottom of the press release. Photos also available here:

So do you know when we are getting some concept art honor?

"I can't wait to book my visit at the Candy Cane Inn."

Wow, what a ringing endorsement of the NEW Disneyland Hotel. I think that last line of yours speaks volumes. If it's going to be soooo wonderful, why are booking into another hotel? If it's going to be a great hotel I think you should be the first to book a room.

Congratulations! Our selection committee compiled an exclusive list of the Top 100 Disneyland Blogs, and yours was included! Check it out at http://thedailyreviewer.com/top/Disneyland

You can claim your Top 100 Blogs Award Badge at http://thedailyreviewer.com/pages/badges

I don't understand why the Victorian or fantasy elements weren't used in the hotel. One of the main reasons I enjoy the parks so much is their ARCHITECTURE. Wonderful, imaginative buildings that set the mood and that you can't find anywhere else. So why does Disney bland out on the DLH?

I tell ya, the company is STILL being run by bean counters...

MarkTwain, I LOVE shag. Coolest 60s contemporary art ever. I can definitely see how the exterior and mabye the lobby and/or a restaurant will be inspired by that type of styling. I know that won't be the case however in the bedrooms, but i like the way they're going to look anyway; gotta love pyro! I also agree with the plan of theming PPH into Victorian Beachside architecture, so it would fit much better thematically into Paradise Pier since it's in clear view from that land of the park

Maybe Disneyland Hotel would be much better after the renovation done and i guess its more fantastic and full of surprises among the customer...
Contemporary Hotels