The Greatest Non-Disney Animated Film. Ever... 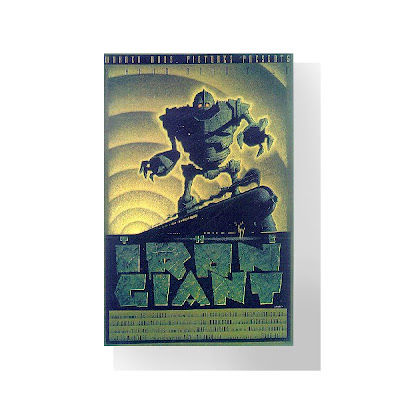 Ten years ago today the best animated film ever made without the name Disney on it came out...

Brad Bird is a genius. More so than even Lasseter, but he doesn't want to run a studio. He just wants to make great, entertaining films. He's done so with each and every one of them so far. But his greatest film, is his first film.

"The Iron Giant" came out on this day a decade ago today. It cost upwards of $70 million dollars. It earned $23 million at the box office. At the time the perception by the Suits/Analyst/Bean Counters of Warner Bros. was that it was a flop. And it was, monetarily speaking, but it got glowing reviews. It was victim of timing and circumstance... over the years, the public has grown more love and acceptance for it. It is/was a film ahead of its time.

It is the best animated film that Warner Bros. ever made or likely will ever make. If all their animated fare was as good as or close to this kind of quality then Disney and even Pixar would have serious competition. But the Mouse and Lamp have nothing to worry about. Bird has now gone on to film live action films, I only hope that he hasn't left the animated world totally behind him. It's interesting that his live-action film is being co-produced by Warner and Disney. I'll bet you can tell I'm fond of this film, huh? I'm not the only one.

You can be anything you want, you can be Superman...
Posted by Honor Hunter at 9:28 PM

anastasia is by far the best non disney animated film ever.

While I did enjoy Anastasia, and it is a very good film...

I believe "The Iron Giant" is a far better film. And the impression it has had is far lasting as well.

THE IRON GIANT is far and away the finest American animated storytelling produced outside of Disney's auspice. An awful lot of Disney people lent a hand to that film, though.

It was NOT, however, a victim of time and circumstance, so much as largely that of a marketing executive at Warner Brothers who ruined the potential of a string of decent-to-fine films at WB over about a two year period. This executive had no competence at all for family films, especially animated feature films. THE IRON GIANT was left adrift without any vote of confidence from this executive or this exec's staff, and the film simply didn't get a chance to "open"... People simply didn't know it was THERE. Meanwhile, over at Disney, internal memos and e-mails were circulating all over the place between artists and animators and story people saying "WE should've done this movie!"

I've not checked in a while, but I'm pretty sure that executive is no longer in marketing, and hasn't been for quite some time. For what happened to THE IRON GIANT alone - that person deserved to suffer a career change.

Anastasia is just all right. It's very flawed, more in the league of Brother Bear than Iron Giant. Kelsey Grammer and Angela Lansbury were inspired voice choices--and spoke in pleasing accents--and Chris Lloyd was, of course, awesome as Rasputin. But Meg Ryan and John Cuask as the lead characters (not to mention Meg Ryan not being the singing voice) was weak, and the pacing was a little iffy, many of the jokes fell flat . . . beautifully done, though. Great animation. But hardly in the same league as Iron Giant, which is a near-perfect film. The vignettes alone where Kent Mansley is looking for evidence of the Iron Giant while suffering the effects of too much Choco-Lax makes it a classic. Add things like the sudden eruption of the gentle Iron Giant into a massive killing machine, John Mahoney as General Rogard, Harry Connick as Dean McCoppin . . . just brilliant.

I agree with Anyonymous about the marketing, however. I remember going to see the movie in the theater and being moved to tears, and wondering what the hell the marketing people were doing at the same time. It was as poorly promoted as any film has ever been . . . and was damaged by the well-deserved rep Warner's non-Looney-Tunes films had of being cheap and forgettable.

At least people discovered it on DVD and VHS. A great film, and stands up even better over dozens of viewings.

Iron Giant is number one for me if only because it contains the best meal prayer Hollywood has ever recorded. But I also second the opinions on brilliance of character design, story, animation and voice work.

I still haven't been able to see Iron Giant. I remember at the time the marketing for this movie came out that it was completely uninspiring. There was nothing that gave me any interest in seeing the movie. It wasn't until years later that I heard that it is a great movie and well worth watching.

Probably better to say, best American animated film not to have Disney name. My all time favorite animated film is Omoide Poro Poro by director Isao Takahata, who also directed another contender - Graveyard of Fireflies.

Brad Bird is a genius. Here's hoping his Ray Gunn sees the light of day sooner rather than later. I'd rather see this film than Incredibles 2.

I think you are completely forgetting about Studio Ghibli!

Actually I suppose those are published by Disney... so nevermind!

My only gripe about "The Iron Giant" is that it needlessly uses profanity. It's mild profanity, but it's still there, it's unnecessary, and it gives me pause about showing it to my own young kids. It's a great film, but I don't think that kind of thing would fly under Pixar (and I'm glad).

And I liked "Anastasia," but if we're going to single out a Don Bluth film for praise it should be either "The Secret of NIMH" or "An American Tail."

I guess I am just a sucker for animated musicals. That is why I loved Anastasia so much. No other non Disney animated movie can compare in that aspect.

I'm going to give a shout out to "Prince of Egypt" too. I'm a big fan.

"The Iron Giant" is tremendous. You will not here an argument from me about its' quality.

However, I'll also nominate "The Land Before Time" and "Spirit" as great non-Disney animated films.

Ghibli is NOW distributed by Disney, but I would have to say "Nausicaa of the Valley of the Wind" is the best non-Disney film ever. (Either that, or "Allegro non Troppo" ;-)

Iron Giant is a rip off of Lilo and Stitch!!!

Hey Anonymous (at the bottom), are you being serious about Lilo & Stitch? You do realize that Iron Giant was released three years BEFORE Stitch and that it was based off of a book? I'm just going to tell myself that you were joking...

fuck you i know what i'm saying.

I'd have to throw in a vote for Prince of Egypt as well, at least in term of Western animation. The Iron Giant is great, but Prince edges out for its deft and respectful treatment of a rather frightening Biblical story.

Ghibli is not owned by Disney, although they do have a distribution deal in many English territotires, they are two distinctly seperate companies.

As other users have said, I'd agree that The Iron Giant is one of the greatest American non-Disney animated films ever produced. However, to call it the absolute greatest ever, seems very short sighted. In essence it is saying that this and the Disney films are better than any foreign animated film ever produced.

I realize that Honor probably didn't think the title would be analyzed this closely, but leaving out that one word (American) makes quite a large difference.

Anastasia is excellent...save for the bat and a few other minor lapses. I'd rank Iron Giant above it, even though it also has a few weak moments--I'll attribute those to Brad Bird perhaps having to heft most of the load himself.
Personally--and I say this after trying so hard to like and appreciate it--you can keep every Japanimation film out there. None hold a candle to even the weakest moments of either Fantasia. I personally feel most non-artists who say they enjoy Japanimation are faking it. And without a great story, art is just something pretty to look at.

To the above: Yes, I'm sure some people do fake liking foreign films (including animated films) just to appear diversified or artsy ro what have you. However, others are simply able to appreciate a good story no matter where it comes from. My Neighbor Totorro, Grave of the Fireflies, and Spirited Away may not be for everyone but they all tell wonderful stories. Inf act what draws so many people to these films is that foreign studios tend to place a greater emphasis on story than their American counterparts, who's primary concern is almost always profittibility.

you're off your rockers if you thought Anastasia was anywhere near the caliber of a disney film. The only reason people even remember that movie was purely because it was marketed off its ass, the actual movie wasn't all that. The only non Disney/Pixar movies worth any are "The iron Giant", "The Prince of Egypt","The Land Before Time" and "An American Tail". Add "Kung Fu Panda" for CG.