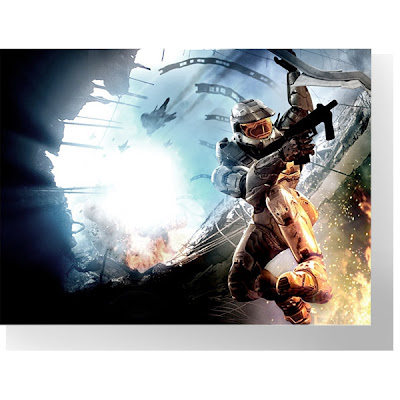 So that's the feeling of Stuart Beattie...

He's the guy that wrote the "Halo" script that supposedly Spielberg fell in love with. Now, from all I'm hearing this is the same script that Peter Jackson was going to make. Which was the same one I read. And it was... good, but not mind-shattering or brilliant. At least in my opinion. And like I said, I can't spend an entire movie never seeing my main character as he walks around in a motorcycle helmet. I have to feel empathy, I have to relate to them and I have to know they're human. That's what a face is for, that's what eyes communicate, that's what a mouth is there to convey. Along with a million other facial ticks that we associate with humans.

And don't get me wrong, there are many other things that need to be better in this script for a Suit to justify shelling out somewhere between $150-$200 million dollars. I have a feeling there's a great story here, but maybe it needs a rewrite. Justin Marks, anyone? Just kidding. His "Supermax" script wasn't the best or worst I've ever seen, but somewhere in the better middle. If I was to have someone do a polish or rewrite on this, it'd be Mark Protosevich, one of my all time favorite screenwriters. He keeps having great scripts rewritten and turned into good scripts... perhaps it's time he took a good script and turned it into a great one? Now, if only the Suits would agree.

If you'd like to read what Beattie said about his love for all things Halo, then go HERE and check out what he had to say to Sci Fi Wire while he was on a press junket for "G.I. Joe: The Rise of ADD" recently.

I'm sorry but if they show Master Cheif's face. Then it wont be staying true to the game/ original story. Have you played Halo? You feel plenty of human empathy towards Jon.

Movies can't slavishly follow a game to the point that it will disconnect an audience. And having empathy toward someone in a game can be vastly different from having it from someone sitting in a theater who just shelled out eleven bucks.

I agree with Honor, movies have to move beyond their core audience to succeed as a film. As much as this film will cost they're not going to make enough money to justify making it. Not unless all the Halo fans want to sign a contract saying they'll go see it ten times apiece.

I'm wondering if you have ever seen "V for Vendetta" Never once in the entire movie do you see emotion in V's face yet, at least for me, I was able to feel a great deal of empathy for him- sometimes even more than characters whose faces are fully visible

Honor Hunter! I caught your first typo in all the time I have read your blog! Is it 2 years now? Seems less, but anyway, first sentence, I think you meant to put 'fell' instead of 'feel' on Spielberg's reaction to the script.

You are human after all! Honestly, you are a great writer and I look forward to your posts daily! Can't wait to find out what 2011 holds in store and thank God (not meant to be in vain!) for your bothans!

The character in V for Vendetta had eyes, a nose and a mouth. Didn't Honor say that? It's different that looking at a windshield.

I hated Vendetta by the way, horrible movie with a lot of ridiculous political preaching. I don't like paying money to have someone try and indoctrinate me.

God help us if movies like Halo and G.I. Joke are this generation's Star Wars. I didn't think it could get much lower than Phantom Menace or Crystal Skull but they are masterpieces compared to those films. Gen X and Y have been pushed aside to make way for Generation Zzzzzzzzzzzzzzzz.

Many movies have managed to well wodnerful, emotional stories without ever showing the main character's face. Whatever you see instead simply becomes their "surrogate face" and the audience will treat is as such. Even if it doesn't have eyes and a mouth.

As for the rewrite, if one's really neccesary I vote for Scott Frank.

Honor, your saying that the script Beattie wrote is based on the prequel novel to Halo, The Fall of Reach. Right? Did the script that you read jump write into the middle of the battle or did it include the Master Chief's backstory where he's taken from his parents and forced into the Spartan Program. If this is included, I'm sure that they could build the Master Chief into someone the audience will care about and relate to.

Have you even played the game? Never takes his helmet off, it would defeat the purpose. Read the books? I have. Dan's right on Fall of Reach, that's the core of Halo and will build into the trilogy you see now. They're right about V, never reveals himself and he is the most popular character, despite never seeing his face, especially in the graphic novel. Phantom Menace, GI JOE, Crystal Skull were "disasters," no heart to them. A movie without heart or story is another Plan 9 From Outer Space.I trust Beattie with it, he wrote Collateral, my most favorite Mann film, plus he created some bits on my most favorite movies, Pirates of the Caribbean. Patience with this, it'll end up as something great, I'm sure. Good luck Jackson and Spielberg, two of the best filmmakers of all time.

He also wrote GI Joe, Kevin. That's one of those films you said was a disaster. For all we know, Halo could be as well.

I used to think the same thing, but then I saw V for Vendetta. It is amazing what a good actor can accomplish without a face