Another kingdom in the Middle Kingdom... 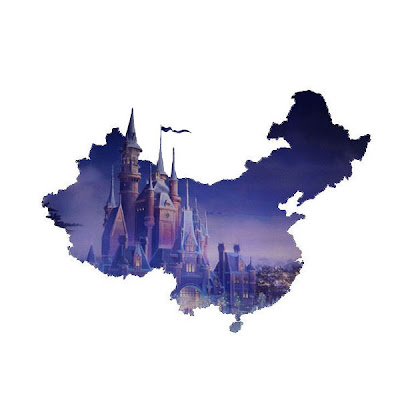 With the focus now off on Anaheim for the time being, eyes turn East...

Shanghai Disneyland is progressing along with a tentative opening date of late 2015/early 2016. As many have said before, it will have a different vibe than the traditional "Magic Kingdom" styled template that everyone is used to. It will still be Disney, but the areas will have a much more culturally specific tone than what we've seen before. If there is an overriding theme that you can take from what is coming, it is this:

What's that you say? Well, I can't reveal everything, or even a great deal of what my Bothans have told me, but I can express a few things that are happening. There will be a great emphasis on water in the park in many of the areas and attractions that are designed for this gate. From fountains, geysers, pool, ponds, waterfalls and water rides, this place will be decked out in aqua. The designs are quite elaborate, and the detail of each area will rival the detail that Hong Kong Disneyland had, albeit the attraction list will be much more interesting.

Another thing that will be noticed in the park, is the amazing amount of adventure attractions and layered theming this resort will have. Even the names should give you a hint. How about Adventure Island in Adventureland? Or a tropical area of the park featuring a dense jungle attraction known as Jungle Challenge. Lavish water and fog effects will be placed around these areas that will deepen the atmosphere of the experience. And if it doesn't get cut, the rock work of the amazing dinosaur attraction, Lost World Roaring Rapids will simply stun you. It's really impressive and I hope that Iger and Staggs don't skimp on the budget and let this sculptured mountain disappear into legend.

The front entrance will be unique as we all know because there won't be a Main Street like every other park has had since the original was opened by Walt. But the beautiful and hypnotic trees, plants and flowers that lead up through the Fantasia Gardens toward the Dumbo attraction will provide a fantasy-like surrounding that will make you feel like your in an imaginary world that is decidedly Disney, but decidedly different.

The attractions will have the detail and quality one would expect from the Mouse, but may take on a slightly unique presentation that I find refreshing, as I hate clones and want each gate to have its own identity. So far, the design work being done by Imagineers is something that will make fans very proud of what can be done to immerse you in a manufactured world. As the plans move forward, we can expect the final design to be ready sometime late next year. After that it will take between two and three years to bring the ideas and dreams into brick and mortar.

And then there are the hotels...
Posted by Honor Hunter at 10:42 AM

when we'll get some real love in DLP?

So the Dinosaur ride will be in Adventureland with Pirates and an Adventure Island? Sounds like the place I'm looking forward to the most in SDL. What else will be there?

Is the rock work in Lost World River Rapids on the same scale as Ornament Valley in Cars Land?

This park sounds so promising. I am really looking forward to see a park as beautiful as DLP.