Looking In The Mirror...

Mirror, mirror on the Esplanade... 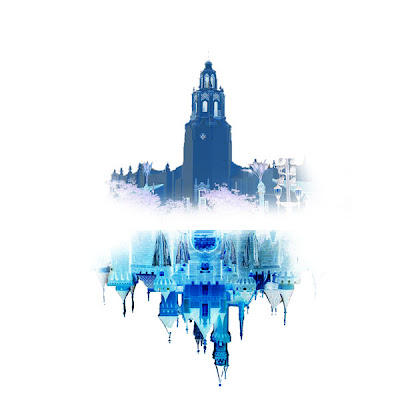 It's been a very bizarre week at the Disneyland Resort...

Not only has DCA been doing better than expected, it's been doing better than Disneyland. Take Sunday for instance. The projected attendance for the day for California Adventure was a mind blowing 58,000 guests. All this while Disneyland was supposed to get a more moderately high 30's figure. It's like a reverse image of a month ago. And just getting 30,000 would have been a very busy day for DCA. Not anymore. Mid to high 40's are the norm and lately it's teetering on the 50,000+ level.

It's amazing the success you can achieve when you do something right.

The bean counters that smacked Disney's name on the mess that was DCA in 2001 couldn't grasp this simple concept that the company's founder put forth as a business model. They were the antithesis of what the man, and his company was. The majority of the new management in Burbank realize this now. Not all, but most, and that's as good as can be expected. After all, 12% of the nation believes Elvis is still alive. You can't get everyone on the right issue, but as long as you can get the majority of them with you, then you're doing alright.

Now, I don't want you to think that I believe DCA is perfect. It's not. It still needs work, and it will still get work. But it will be incremental, not dramatic like what has come before. It will have some interesting improvements, but that is/will be a talk for another day. In another post. For the next couple years, lets all walk down Buena Vista Street and enjoy what the company does best when it does its best. Let's take a stroll through the Pacific Wharf area and head beneath that arch for a breathtaking view of how you can be consumed by an idea. It's the best representation of entering the world embodied in a film. It's mesmerizing. Even if you're not a fan of the film, "Cars", Cars Land is a sight to behold.

And the new found success of DCA is good for everyone...
Posted by Honor Hunter at 11:16 PM

At the moment I am very confused about what will be best for the park- since all of this positive change was brought about by the park's attendance failures, won't this success limit Disney's incentives for further change? I am actually at Disneyland right now and am very impressed by Buena Vista Street, the Cadillac Range, and some of the changes at Paradise Pier. That said, another wave of change at PP is still sorely needed so that the new theming be more consistent and immersive and I would love to see improvements at Grizzly Peak and Hollywood Land (which needs it the most). While the improvements look great and the park is definitely on the right track, what environment would lead to further changes and what is a realistic timeline for such change?

Paradise Pier needs another attraction on the unrenovated western end, Grizzly River Rapids needs some AA show scenes, Soarin' needs a new film, or an alternate film, the 2 vacant stages at Hollywood Land need attractions, Hyperion Theater needs to be enclosed, and concession, washroom facilities, and elevators added, the street in front of ToT needs to be continued in behind CarsLand leading to a new Hollywood attraction, and Cars Land could use one more minor attraction. So there's still some work to be done.

Meanwhile, any truth to what Al said this morning about Finding Nemo Submarine Voyage, Autopia, and Innoventions being removed?

Now that Disney has addressed the problems with Hong Kong and California Adventure, how about a post on Walt Disney Studios Park.
The poor orphan child of the theme park empire. I've been to see it and it is a mess. Some nice elements, but everything from the layout to the theming to the rides needs work. With by far the lowest attendance figures (fewer than 3 million) even though the Disneyland Paris draws well (more than 10 million).
As staunchly as you argued for the DCA update, what say you for this black eye?

Any chance what't left of the parking lot behind Carsland is slated for a new improved Autopia to replace Disneyland's? They could even theme it to Cars 2 and make it a trip around the world.

Or alternately, are they saving that plot for a real Wagon Wheel Inn. Seems significant that they left that icon out of the land itself.

I have always found the "carnie" feel of the west side of CDA offensive. Paying to play a midway game after paying to enter the park cheapens the experience. I frankly feel the whole Paradise Pier, Pacific Wharf, and Bug’s land needs to go away!

I completely agree with Mark about Pacific Wharf and a bug's land but feel that Paradise Pier is starting to show it's potential. While it certainly began as the worst example of DCA's shortcomings, it is beginning to emerge as a unique, immersive land. Now with two major dark rides (Toy Story Mania and Little Mermaid) and an emerging aesthetic, the land could take a major step forward by abandoning any other reminders of its original design (Jumping Jellyfish, King Triton's Carousel, entrances to California Screamin' and Mickey's Fun Wheel, and even Goofy's Sky School) and planting more references to classic Disney cartoons that differentiate it from other lands. Also, I no longer mind the midway games since they were redesigned to feature Disney characters (including classic ones like Casey at the Bat). Thus, while California Adventure would be much better off without the other two areas going forward, Paradise Pier has become an intriguing work in progress