A Deppless Pirate Film For Disney... 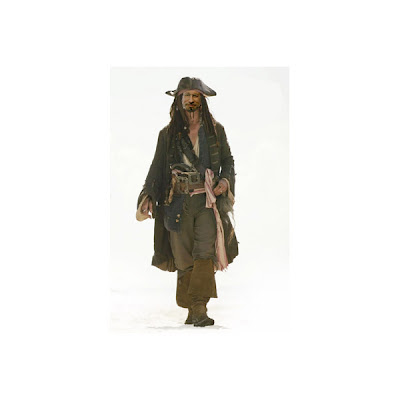 Since all the new films that the newly reborn DreamWorks develops will be distributed by Disney this is ironic...

According to a USAToday article, Steven Spielberg is developing a Pirate film based on perhaps the last novel Michael Crichton did before his death entitled, "Pirate Latitudes." David Koepp is writing the adaption and Spielberg is producing with the possibility of directing it. The plot essentially is a "men on a mission" story wrapped in a pirate narrative about a group that tries to get into Port Royal and steal a Spanish galleon's treasure. It sounds a whole lot more exciting than Spielberg's remake of "Harvey."

Let's just hope the director isn't going through another "Hook Phase." He had a series of mostly forgettable pap before he finally did the trilogy of "Jurassic Park," "Schindler's List" and "Amistad" back to back. Although the last one was the weakest of the three, it clearly put Spielberg back on track after several years wandering around looking for creativity. Perhaps he may have found it with some pirate gold?

He certainly didn't find it looking for a Crystal Skull...
Posted by Honor Hunter at 12:16 AM

This sounds good, a kind of a caper-high seas adventure. I hope he directs this with an interesting cast.

I don't want a Harvey remake either, Jimmy Stewart's film was perfect, can't be improved on, life is short, do something new!

People who shit on HOOK tend do not have been part of its intended audience when it came out. I first saw the film as a young boy, and it's still one of my favourite things Spielberg has ever been involved in.

I thought hook was a GREAT movie too. More movies like that are needed today that people off all ages can enjoy together.

Hook sucked! It was lame. Not as bad as Spielberg's Always, but close. People with bad taste don't recognize they have bad taste. LOL!

And the decision by Hoffman and Williams to not allow their likeness to any toys was ridiculous. They get pain millions, but refuse the film makers to make money off their image on toys for the film. I'd hate to have been one of those Toy Makers and had to eat all those action figures no one wanted to buy.

Next thing, these people are going to talk about how they loooved those cute kids in the Jurassic Park films because they added so much to the story! Please, someone's been snorting Pixie Dust!

Guys, you can say what you want...

We may not agree, you can use the comments to vent, but anymore use of "colorful metaphors" will be deleted from the comments. There have been too many of them lately and if you can't make your statement without them then you don't have that great an argument.

Please be a little more creative than using these words even if you disagree with mine or someone else's opinion, k?

Yoddling Thru The Ages said...

Tell me, what is the third highest grossing pirate film? Hook of course, a favorite of mine from childhood, really well done, no one can do that same level of imagination, truly a classic. Captain Blood, Pirates of the Caribbean, Hook, now Pirate Lateral, can't wait!! Forgettable pap? Are you honestly forgetting the greatest adventure trilogy of all time, Indiana Jones, and ET, The Lost World, JAWS, and Close Encounters of the Third Kind, tssk tssk sounds like someone doesn't appreciate classics.

Hook is 4th highest grossing, quite a lot of money. Amistad was nominated for 4 academy awards and you call that weak?

For ANYONE that fawns over Spielberg, I have 5 words for you:
War of the Worlds and AI.

Although that should be nuff said, but who in their right mind would call the pablum puke that is Jurassic Park a great movie?!? Without the special effects that is EASILY one of the lamest movies ever made (of course with the OBVIOUS exception of War of the Worlds!)!

AND The recent Indiana Jones was as much Spielberg's fault as it was Lucas'! Maybe MORE so, since Spielberg directed it!

Spielberg is probably one of the MOST over-rated directors of our time!

"Indiana Jones, and ET, The Lost World, JAWS, and Close Encounters of the Third Kind, tssk tssk sounds like someone doesn't appreciate classics."

Uhm Kevin, first off you need to read my bio if you want to know what movies I like. You woundn't have mentioned those films if you had. Secondly, Hook and Alway happened between 1989 and 1991, which was a down period in his creativity and box office power.

Raiders and his other films were made earlier during his greatest period. Once he made Jurassic Park he started on a new spurt that ran out of gas with Crystal Skull (naturally, my opinion).

As for Hook being the 4th highest grossing. It didn't make that much money. The profit participation between Spielberg and the stars left the studio with a very disappointing amount of cash. Between the budget and the gross profits, it's a very disappointing end result. And I'm not even going into the script/productions problems that I have with it...

"We may not agree, you can use the comments to vent, but anymore use of "colorful metaphors" will be deleted from the comments. There have been too many of them lately and if you can't make your statement without them then you don't have that great an argument."

A lot of mistakes on this thread.

First, The Lost World came out between Schindler's List and Amistad.

Second, Hook is not the fourth highest grossing anything. It made $120 million domestically and $300 million worldwide. A solid hit, but not Jaws, Raiders, E.T. or Jurassic Park numbers.

Third, Crichton actually has a second nearly complete manuscript which will also get published after this one.

Fourth, "I have 5 words for you:
War of the Worlds and AI."
That is six words. War of the Worlds is actually a very good, tense movie that takes a different spin from the Emmerich style of mass destruction by focusing on a single family and putting it through the lense of 9/11. Great film except for the tacked on happy ending.

"A.I." is a masterpiece. A wonderful, experimental blending of the styles of two unique directors to create a film that is both harsh and warm. A terrific fractured sci-fi/fairy tale.