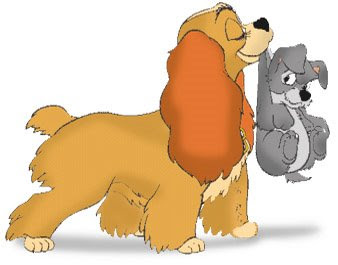 Rumors are circulating that "American Dog" has found it's new name...

This would make sense, since the lead character is a dog named Bolt that thinks he's a real super dog. It's not yet confirmed, but the speculation in running overtime on this one. This project is a CGI film that is scheduled to open on November 26th, 2008.

The odds that this is the films new title are pretty good.

And no, that picture is "Lady and the Tramp" artwork, not "American Dog"... from what we know, Bolt is a white German Sheppard dog that works on a television show, but doesn't know that it's fake. We should be seeing artwork for this by the end of the year.