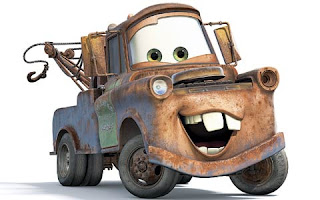 Lots of people have noticed it... I know I've seen it. When "Cars" came out last year and only wound up making 462 million that everyone declared it a disappointment. But in the last six months I've noticed more and more "Cars" merchandise. Every time I see a group of kids, I notice one of them having a "Cars" backpack, Lighting McQueen T-Shirt or shoes with the logo. It seems I wasn't just having a hallucination... wondering to myself "Did I like that movie more than I thought?".

Take a look in Variety today for a nice article about the booming market for "Cars" and how it's not just continuing... it's really in demand:

"While many refuse to rank "Cars" as Pixar maven John Lasseter's finest two hours, its merchandising campaign has become a global phenomenon. A year after the motion picture release, a sojourn to a local Toys R Us will reveal collectors -- boys to men -- on the prowl for the new shipment of Mattel-made die-cast miniatures, with the movie's extensive ensemble of characters yielding an endless array of product iterations (Dinaco Blue Chick Hicks, anyone?)."

It's kind of shocked the experts and perhaps Wall Street will now take a second look at this:

"Do you think anybody knew it would have these kinds of continual legs? No way," says the merchandising topper for a rival studio. "I've just been impressed. It's doing this without anything supporting it in the marketplace."

Over a year after the movie was out in theaters, "Cars" is expected to pull in 2 billion dollars for the Mouse this year... that's "Winnie the Pooh" sized numbers there people. Uncle John appears to be having the last laugh on those critics lamenting the disappointment that "Cars" was for Disney.

Money talks and those Wall Street critics are speechless... or perhaps they'll act like Mater and say: "Dat gumb!"
Posted by Honor Hunter at 8:34 AM