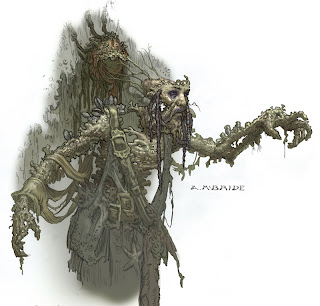 It appears a bunch of thieves intent on robbing a casino in Vegas have pulled off another robbery... the crime of depriving "At World's End" from three straight weeks of dominance as the number one spot in domestic box office. That's right, those good looking, well dressed criminals from "Ocean's Thirteen" got away with $37,080,000 from a Vegas casino owned by a guy that looks remarkably like Al Pacino.

Well, I guess number two isn't all that bad. It did increase its domestic haul to $254 million and its foriegn take was $493 million. For those that are mathematically challenged, that's a total estimated draw of $747.1 million. Three quarters of a billion dollars... Not bad for a film that's considered by some a disappointment. Not everyone can be pleased, but I'd say the Mouse is pretty happy. Part three may not get to a billion dollars as "Dead Man's Chest" did, but it's still a mighty, mighty large amount of treasure to have found. The international take just keeps on ticking... seems those foriegners like Pirates.

If it's any consulation, it may have been number two here at home, but it's still number one internationally. "At World's End" is now the 23rd ranked all-time industry boxoffice hits worldwide. It is the third most successful foreign release for the Walt Disney Company, fourth-biggest worldwide grosser for the Mouse after "Dead Man's Chest", "Finding Nemo" and "The Lion King". It opens in it's last big territory, China on Tuesday. Oh, and putting things in perspective... Spidey has a total worldwide gross of 864.7 million. Only about a 117 million lead over the Cap'n, but it'll still be difficult for him to catch up even without the rum and sober.

I wonder if Jerry Bruckheimer has called Ted and Terry to ask them if they have some ideas for a fourth? If not, there's plenty of time to write a script after the new year when "The Lone Ranger" script will be done.
Posted by Honor Hunter at 5:40 PM

For the benefit of you and readers, PLEASE learn the difference between "it's" and "its". "It's" means "it is". This is a case where you DO NOT use an apostrophe for a possessive.

This little thing improves writing so much... love the site btw.

Thanks for the correction anonymous... just for the record, I DO KNOW the difference between the two, but I do this in my spare time and I usually post late the night before or early in the morning. Sometimes I miss things since I'm in a rush. I'll usually go back and check it later to make sure I didn't miss anything. I'll try and be more careful in the future. Hehehe...