The Need For Heroes... 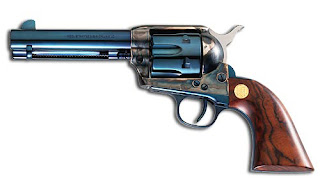 Even though it's been talked about, there is no official word that "The Lone Ranger" is happening. Not until they announce it. But Jerry Bruckheimer is doing it. Bank on it. All one has to do is connect a lot of evident dots...

There was that interview with Starlog magazine in which Jerry Bruckheimer said:

"I hope I can make a big-scale Western someday."

Of course we've seen the quote by Peter Gilstrap in Variety:

"Beyond another "Pirates" project, word has it that the scribes might be doing a take on the Lone Ranger saga for Bruckheimer."

And as Jim Hill reported the Mouse is busy securing internet domain names faster than you can say "hi ho, Silver".

Well now BoxOfficeMojo has an interview with Ted Elliott and Terry Rossio in which they talk about a lot of things. There's a hint late in the article when Scott Holleran ask them what type of screenplay do they want to write next. Ted Elliott's suttle response is loaded:

"We want to do a Western. The public consciousness that existed when Westerns were popular—that sense that, if you leave town, you could easily die—isn't there anymore."

It sounds like they could be talking about TLR without mentioning it. But from their interpretation of Westerns, it sounds like it won't be your father's Lone Ranger. It'll be a serious battle of life and death. And how no one really wants a hero... because if there's a hero around, then something is wrong. Something awful. Listen to Elliott talk about how political correctness killed the Western:

"I think it started to fall away in the middle to late Sixties to the early Seventies—this idea, as in "The Man Who Shot Liberty Valance", that the men you need to build a civilization have no place in it once it's been built. If you think about the idea of a hero, the last thing you want to show up in your life is a hero—because all that can mean is that there's something really bad going on. The only time heroes show up is if there's conflict. It's not good to be around heroes if you're not a sidekick—you can become collateral damage way too easily."

Then Rossio got to talking about their interpretation of those "wide open spaces" that cowboys in Westerns alway seem to be looking for:

"If you think of The Searchers, that lack of civilization is dangerous." and "In the Western that we want to do, those open spaces need to be made frightening."

How about that? A "frightening" interpretation of the Lone Ranger. One in which a hero is kind of dreaded because you know the situation is so bad that someone is needed to rectify it...

It could be interesting...
Posted by Honor Hunter at 6:02 PM