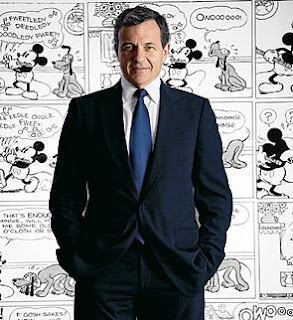 There's a nice article over at Time Online that focuses on Bob Iger and his early stewardship of the Walt Disney Company. It's a pretty optimistic piece that rings all the right bells when talking about leadership.

"As his strategic goals are revamping Disney's business, Iger's loose-reins management style is breathing some air into the corporate culture. He abolished the Politburo-like strategic-planning unit that was created and run by Eisner, and encourages senior executives to be more entrepreneurial. Iger tapped Anne Sweeney, who runs Disney's television group, to negotiate the iPod deal with Apple and gave her the autonomy to close it in three days. While the Internet group rebuilt the Disney website, Iger made himself available as a sounding board but left them alone--until the one night when he personally delivered moral support, in the form of two cases of Red Bull. "My role is to create a vision and strategy and then lead people in the direction," Iger says. "But I allow them to get there on their own.""

I've alway believed in the saying: "hire the best people and get out of their way"... Iger is a refreshing breeze compared to the last two decades under Michael Eisner's leadership.

Thanks to "The Disney Blog" for the hat tip.
Posted by Honor Hunter at 10:31 AM