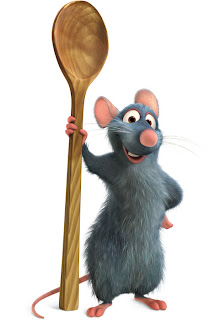 Brad Bird is a genius.

I know, I know... I've said that before. Many times before I've mentioned how I think he's brilliant. I'm sure the only phrase I've said more on this blog is about how John Lasseter is possessed by the ghost of Walt Disney himself. But it's so true...

Brad Bird is a genius.

This film has everything we expect when we go and see a Pixar film. It's entertaining as hell. It's intelligent, never talking down to the audience. It's beautiful to look at.

Strangely, the movie it reminds me most of, "tonally" at least, isn't a Pixar film. I guess maybe because of the romantic atmosphere and all it reminded me of "Lady and the Tramp". It just has that feel... that lust for life.

I know that Brad took this over when it was deep in development when Jan Pinkava couldn't rap his hands around an acceptable story. They immediately asked Bird to step in and takeover the troubled project so it could still meet the targeted release date. Now under normal circumstances this would have turned out to be a disaster. This is Pixar and they are anything but normal. Bird took over, did a complete rewrite and the production team worked overtime to make up for the story problems.

And in a little more than a week, everyone will be able to see the results of Brad Bird's film for themselves.

Is it Pixar's best?

It's a wonderful film though. If you'd ask me to rank Pixar films from favorite to least favorite I'd have to say...

Now, don't anyone start to rag me because I ranked Monster's Inc. last... it's just the one I liked the least, but a Pixar film at its worst is better than most films at their best.

This film is filled with love and charm in every frame. We know five minutes in that we are going to have a great time. Bird really establishes the film from the get go. You're never bored, you're never not interest in the characters. The Pixar "Brain Trust" can clearly be seen working its magic. They know how to tell a story and Brad Bird knows how to weave a narrative plot-line like few can. The film starts out in the French countryside where Remy(Patton Oswalt) lives with his father, Django(Brian Dennehy) and their brood. We can see right from the beginning that Remy is different from all the other rats. Even his lovable brother, Emile(Peter Sohn) doesn't understand why Remy has to be different. Why he can't just accept a rat's position in life. But it's around Emile that Remy can at least be himself. Talk about his love for food. His desires to do more than rummage through trash for something to eat. After a tragically funny scene the Rats have to leave their home in the country and Remy gets separated from his family during the escape. Remy winds up in Paris after a long journey down a dank, dangerous sewer. It's hear that he finds his true calling. But in a city where food is elevated to an art, a rat is the last thing one thinks of when imagining great cuisine. A rat to food is like oil to water. Bird weaves the tale, putting Remy in a position where he finally has the opportunity he's waited for. Remy through a series of events winds up using the simple minded Linguini(Lou Romano) as his puppet as he sets about creating his cooking masterpieces. The nemesis in this story is the devious, short chef, Skinner(Ian Holm) who we delight in watching as he thinks he's going mad when he keeps seeing rats around his restaurant. I won't go any further into the plot... if you want to know more you need to watch it yourself.

If you're a fan of Pixar, animation or just good filmaking... when it opens on the 29th go and buy a ticket. It's a great way to spend an evening. Most films end and people leave quietly... at Pixar films they applaud... and then they tend to stay quietly. Respecting the credits of these talented people as they scroll up the screen. When the lights came up on the sneak preview I saw, I heard a lady behind me say: "That was worth twice what I paid for it". Her friends laughed and agreed... I couldn't help but think what word of mouth will mean for this film. At work on Monday will she tell everyone about it? If she does, her saying she'd pay twice as much for it will be priceless...
Posted by Honor Hunter at 9:26 AM

I agree 100%. Ratatouille was amazing. I can't wait to see it again opening night. It started with a few simple scenes that I realized a few minutes in made me attached to the characters. It seemed effortless. The action scenes were great, the scene where they learn to cook together was really funny, and the ending was very good.

What a great, funny, smart movie. I hope JL is able to transform Disney into it's own successful version of this.

I too saw the preview and can't wait for the movie to open. I can't believe Pixar is so good! They are the new stamp of quality in filmaking.

My friends and I only came to see it because of Pixar and Brad Bird. The trailer was ok.. but as soon as the movie began I knew right then this was going to good. It turned out to be great. The entire theater applauded when it ended.

I have been dying to see this movie since I saw the first video -- the craftmanship is superb, the story has plenty of heart, it is a beautiful thing just to look at -- and I love rats besides! But the detail is just so incredible, I would want to go see it if the main character was a warthog or some other creature! ;)

I hope that Pixar is able to keep true to itself and never be changed by the new Disney.