From Monsters To Retirement...

I know we mentioned this a couple days ago, but Variety had a little blurb about the plotline to "Up" that included the first artwork from the film.

"Up", directed by Pete Docter, is the story of a 70 year-old man that teams up with a wilderness ranger to fight ferocious beast and dastardly villains while still making it home in time for dinner. I wonder if the adventures are real or a sign of the old man's senility? Anyway, it somehow sounds like a much more straight forward plotline than most Pixar films, but as always we can expect a movie story that is a cut above the rest. Bob Peterson(who's also the voice of Roz) is writing the script and will co-direct the film.

The film will be released in 2009 but may be overshadowed by the press that will be surrounding Disney's "other" animated film that year: "The Princess and the Frog", Disney's return to hand drawn animation. Oh, and another thing that will probably overshadow "Up" is the preview in front of it for the next years release: "Toy Story 3". 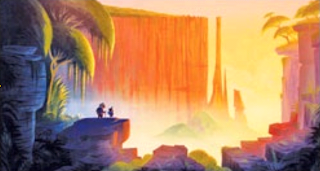 This sounds like it could be really cool. Monster's Inc. was my favorite Pixar film. I'm looking forward to it more than Toy Story 3.