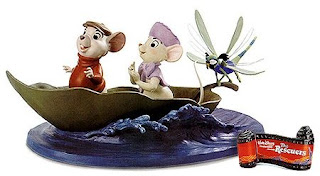 On this day in 1977 Walt Disney Production released "The Rescuers". A bright spot in the cloudy sky of 70's Disney animation.

The story of a pair of mice from the Rescue Aid Society who receive a message in a bottle from an imprisoned orphan. Bernard and Miss Bianca go on an adventure into murky swamps to find the little girl held captive by evil, treasure hunters. Bob Newhart's performance as the understated Bernard is a pleasure... especially when matched with Eva Gabor as Miss Bianca an upper-class, socialite mouse. Wolfgang Reithermana (Sword in the Stone, Jungle Book) co-directed this film with John Lounsbery (The Many Adventures of Winnie the Pooh) and it's a real charmer. With a classic Disney villain by the name "Madame Medusa" played superbly by Geraldine Page.

As a note, originally the animators were going to bring back "Cruella de Ville" before deciding to create a totally new villain.
Posted by Honor Hunter at 6:24 AM

Are they planning on coming out with a 2 disc set for this film?

I always thought these characters would make a great tv show. Kind of like what Chip and Dale's Rescue Rangers was.

I wonder why they never attempted that.