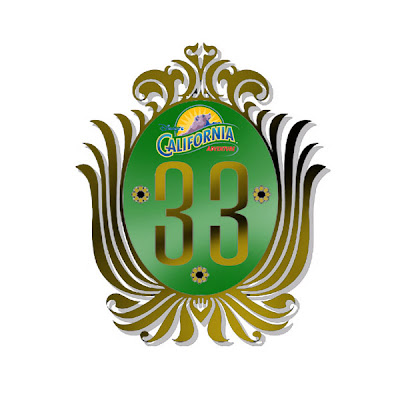 Yes, that logo is what you thought it was...

Think there's not enough eateries in DCA since they pulled the plug on so many after the initial opening? Well, you might have a very exclusive eatery come 2011/2012 if the Imagineers and Suits have their way.

One of the prime examples of exclusiveness that the Mouse is thinking about. Again, that was "thinking" about. Not approved yet, but several concepts have been floating around regarding an exclusive club/restaurant like the one over in NOS known as "Club 33" that most Disney fans know about.

They've even begun sending out feelers asking 33 members and people on that loooooonnng waiting list if they'd be interested in an exclusive club over on the other side of the Esplanade. Should they get enough positive feedback, WDI will proceed ahead with plans that Burbank thinks could net some big cash from those willing to fork it over. Of course, DCA has to develop a reputation other than the one it has now and that'll take time. Once that brand, spankin' new front entrance opens to let guest experience the new look, it's hoped that along with all the other improvements, the truly Disney faithful will go for the chance to be part of this historic venue. Many people who are on that waiting list might be willing to become the founding members of this exclusive, and as of yet unnamed club.

Not to mention it'll reduce those long lines of people waiting to get into Club 33 as well...

UPDATE: It appears that several other websites are now reporting the goods on this. I've known about it since last week, but chose to wait and post if for Monday while away for the 4th of July. I promised not to reveal details from my source, but since it's already out there I'll just mention a few.

The club would be known as the "Carthay Circle Club" or "CCC" as in Tripple C, and be built in the future Carthay Theater. Styled in the Spanish Revival style that Los Angeles was bathed in during the late 20's/early 30's, the club would evoke the feel of a place that Walt would have been seen in. Heavily layered in the animation history of the company, members would walk around rooms designed to have the feel of what you'd find at an idealized 2719 Hyperion during Walt's younger days.

Will it get made? Will people join an exclusive club at the still evolving park? Time will tell...
Posted by Honor Hunter at 12:02 AM

I actualy had the chance to go to Club 33 with MouseInfo friends in 2005. It was so cool, and I would jump at the chance to do it again. If I had the money, I would certainitly join the proposed club.

Or, they could make this club open to only DVC members.

Or..... maybe they could give D23 members the opportunity to buy a "limited" membership where they could visit the club once a year for a special occasion.

Or make it a perk of being a D23 member. I imagine that would send membership purchases through the roof; hell i think i would get one then.

They could of course limit you to a couple visits per year, as to not overrun the place..

This is nice. The park needs a few more layers, even a few exclusive or "secret" ones to make it more interesting.

Bad idea to build INSIDE the Carthay Circle Theater. Don't make the park's wenie / focal point something you have to pay to go inside. Spend the money on the Walt Disney Museum / Attraction inside the Carthay Circle like what WDI originally planned for.

Based on other descriptions I read most of this would be on an upper level of the theater with an entry and lounge being on the ground floor. I would think there would still be plenty of room left on the ground floor for an attraction.

So...would one of the clubs be considered more exclusive than the other? Will getting into this one seem like "second fiddle" to 33?

Terrible. I'd rather have a big fancy luxurious 5-star restaurant that is at least accessible to everyone than another useless awful "Club 33." DCA needs more good restaurants! or A good restaurant... from what I remember, there arent any.

I have no problem with it taking up a portion of the space if there is still enough room for a reasonably sized Walt Disney Attraction. If the plan is to use up most/all of the Carthay Circle's space then this is a horrible idea.

The reason Club 33 works is because its hidden away from the main hub of the park; uses space that otherwise would be backstage; and it isn't in the park's main weenie. If this new club was say going on the upper level of the Little Mermaid show building, I'd have no qualms about it and be all for it. In fact, I don't understand why they wouldn't just build the club there as it would allow for viewing of WOC.

DCA's icon needs to be available to all, not just the rich or well connected.

I pray this doesn't happen. Club 33 is one of a kind, we don't need another exclusive club across the esplanade, especially in a park that has been struggling for it's first 10 years of being open. As cool as it would be, this really needs to be axed. How would the average guest feel seeing the weenie icon at the end of Buena Vista Street, only to find they can't enter because they need a membership. It's like putting a club inside Sleeping Beauty Castle.
If they were to do this, take out the Wine Country Trattoria, and make that area exclusive. It's in a prime spot to view the World of Color, and in an asthetically beautiful area of the park.

I don't mind there being an exclusive club. I do mind that it occupy the weenie of the whole park. It would be a major let-down. And not just for an in-the-know guy like me. When families enter the park...I bet many will head straight for the weenie ahead of them, to check it out...only to find out they are not allowed there. If they want, why not add real buildings (instead of false facades) to the street in the Hollywood section, and have the club there? Or even add to the Hyperion Theater? Many old-school theaters had fancy lounges and such.