More Chuck For Your Buck... 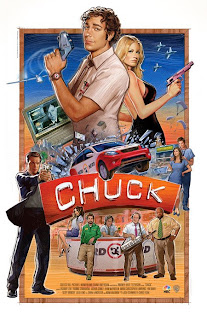 In addition to the other poster that NBC released, here's the official poster for the third season of "Chuck" that premiered at Comic-Con...

I don't know who did this poster, but it sure looks like Drew Struzan with the style of the painting. And that is a very, geeky, cool thing.

Hopefully the series will continue to gain viewers because it deserves them...
Posted by Honor Hunter at 6:02 AM

I do like that show. It's fun to watch and I hope it does well this year (and keeps doing better...)