Halloween By The Sea... 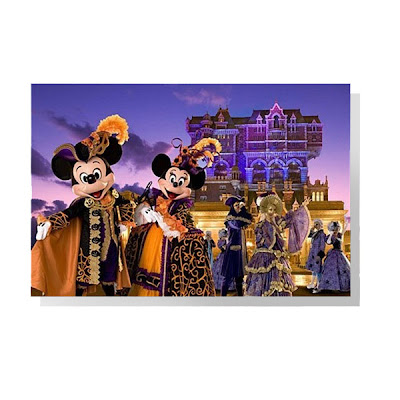 It's almost eight years old, but there hasn't been a Halloween themed event in Tokyo DisneySEA like there is in Tokyo Disneyland, but that's all about to change...

The Tokyo Disney Resort's very own Disneyland, just like the original here in California, has had a seasonal Halloween themed time of the year where the park is decorated and the holiday is celebrated Disney style. Even DCA celebrates Halloween, albeit not as lavishly as Disneyland. But despite being around as long as California Adventure, DisneySEA hasn't had a consistent entertainment for guest entering the most stunningly beautiful theme park in the world... until now.

Starting September 10th, Tokyo DisneySEA will have "Mysterious Masquerade," its first park-wide Halloween event. The typical things you would expect to see on Halloween will be there from pumpkins, eerie music, dusty old cobwebs with flickering candles, all of which will be layered in details. The Masquerade will be a special twenty-plus minute show featuring Mickey and Minnie going to a costumed dance party at which it's revealed that all the other guest are ghost. Another smaller show called "Masquerade Dance" will feature various Disney characters and a special Halloween themed fireworks celebration called "Night High Halloween" will delight guest throughout the park. The event will run till November 3rd. As if they couldn't make TDS anymore desirable to go see... Scary, isn't it?

Can't wait for the Tricks and Treats...
Posted by Honor Hunter at 1:50 AM

I would *love* to see an American park, Disney or otherwise, do this sort of thing (especially EPCOT, using Italy's Venician look (if mirror-reversed ;-) ) as the centerpiece), but I'm pretty sure the nut-cases would go, well, nuts, over the idea of 20,000 people all in masks as something that would just scare the kids too much.

for "conservatives", some of these people really have no respect for tradition. ;)

there still have disneyland califorina halloweed firework are coming

I've been watching TDS's "Mysterious Masquerade" on YouTube this past week and it was amazing! I am so jealous of TDS right now. ...almost.