In Brightest Day, In Blackest Night...

A dying alien named Abin Sur, crashes on Earth. In his last dying moments, he has his powerful ring search for and summon the planet for his replacement. The fallen member of the Green Lantern Corps asks the ring to find someone that is "utterly honest and born without fear" and all he could come up with was this? 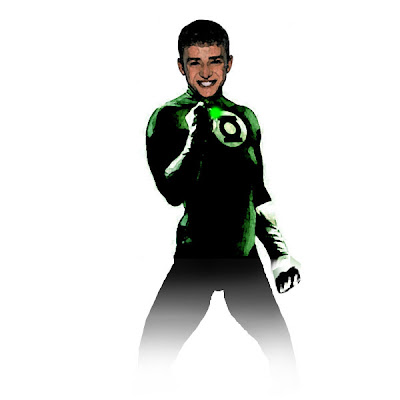 Better check the battery and recharge that thing...

First, Ain't It Cool News was reporting the testing of Justin Timberlake for Green Lantern earlier today, and now the Hollywood Reporter is confirming that along with the news that Bradley Cooper and Ryan Reynolds are among the other two in the running.

I have nothing against Timberlake, but he ain't test pilot Hal Jordan. Ryan Reynolds is the best of the three, but he's currently attached to "Deadpool" and I don't think Suits over at Warner Bros. would want him playing two Superheros. Bradley Cooper could wind up being the man that gets the job being as the studio is very sweet on the people involved in "The Hangover" right now. But Justin Timberlake? Who would have thought Abin Sur was a fan of N Sync?

Even space aliens can have bad taste...
Posted by Honor Hunter at 7:57 PM

All those three are great in my opinion. JT is an odd choice, but look at him when he hosts SNL! He's hilarious.

You DO KNOW that Green Lantern is NOT a comedy, right? It's not meant to be played funny. It's a sci-fi epic and is meant to be about the lone guardian of our planet?

I know, But the two other choices are both mainly comedic actors *whistles*

And Michael Keaton will never make a good Batman.

And 'UP' is bound to fail because it's about an old man.

And because the first one failed, any film about the Hulk will be awful.

Online fans know everything, don't they? Except anything about acting and writing and what it takes to make a successful film.

All we know is what we've seen, folks. What's so awful about leaving creativity to the creative types and pretending you're an AUDIENCE?

Ron, leaving it to the "creative" types is all what I'm about...

It's what got Walt Disney Feature Animation in the mess it was in. Letting people work on creating stories who had no knowledge of how to do it was a stupid thing. Letting executives that have a great grasp of spending money, but no understanding of character and story is also a stupid thing.

And for the record, I thought Michael Keaton was TOTALLY miscast when he was in the first two Batman movies. Not as Batman, but as Bruce Wayne. I think the last two Batman films are evidence of that. Christian Bale is PERFECTLY cast. That is what the character was/is/should be...

As the Comic Book guy would say, worst casting ever. Of all the superhero movies, you wan to ruin this one by casting possible the worst actor, that's like hiring Hayden Christiensen to play Thor. Chris Pine was by far the best choice, and they should stick to it. Another thing, people who start rumors about this kind of thing, you guys have absolutely no life, if all you do is come up with rumors like this, you must have no life whatsoever.

P.S. The first two Batman films are the best and Michael Keaton was great. Christian Bale is a cool Bruce Wayne but as Batman, he doesn't need the voice. SNL has gotten so bad since 2000, it isn't even the quality it was in the 60's, 70's, 80's and 90's. They get the worst people like Jimmy Fallon and Justin Timberlake, so no he's not a good host, Christopher Walken was the best host and when did he host, in the 90's, that's right.

Hey, he's got enough to deal with playing "The Shat" in the ST reboot. I don't need Pine playing Hal Jordan too. What's going on here? Are there so few actors that they only have these meager picks to choose from?

The first two batmans are the best?

Ha! Ha! Ha! Yeah, right. Better than Batman Forever and Batman and Robin, definately. Better than Begins and Dark Knight? Not even close. Not even in the same city, state or country.

All attempts before Nolan are nothing more than abortive attempts at making a Batman film.

I agree with Honor about Keaton. He's totally miscast as Bruce Wayne. He's an average joe. That was not Wayne. He's a good looking, wealthy child of Privilege that no one would suspect of being a brooding vigilante. Keaton is not that, never was.

When I first heard Keaton was cast as Batman all I could see was Mr. Mom in a Batsuit. Keaton proved me wrong. I loved Keaton as Batman/Bruce Wayne. Bale plays Wayne like a playboy as phony and pretentious as Patrick Bateman whereas Keaton's Bruce was much more complex. I think both actors have brought their own unique approaches to the characters and have made them their own.

As for Gay Gardner, I was never a fan of GL, don't see how it will work and Timberlake is a fag.

How's your friend DD doing? I haven't talked to him in ages.

Oh brother, another "Dark Knight" is the best movie ever worshipper? I'm proven again that people know nothing about film or film quality, let's see you match Burton's vision. Which ones came first? Hmmmm, I wonder. Let's see Keaton say the line "Ready to believe in good" without sounding like he has throat cancer.