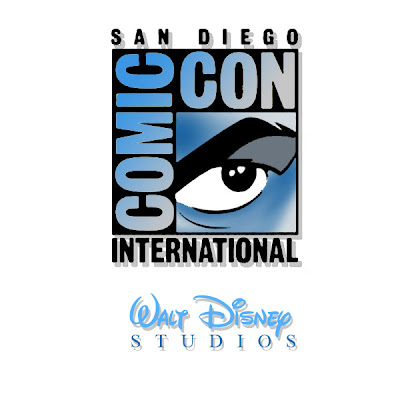 Looks like the Mouse has released its schedule for Comic-Con 2009 and it's uber-cool/cotton candy delish...

And buried in it is the actual first verification of the plot to "Tron 2.0," introduced at a Thurday panel which I so wanted to sit in on. Unfortunately, something came up this year and I won't be attending for the first time in a decade. I am so bummed. Here's the press release:

BURBANK, Calif.--(BUSINESS WIRE)--Animation greats Hayao Miyazaki and John Lasseter and directors Robert Zemeckis and Tim Burton will take part in their first ever Comic-Con at the San Diego Convention Center July 23-24. The filmmakers will be on hand to help Walt Disney Studios Motion Pictures showcase a wide-ranging roster of upcoming films, including 3D juggernauts ALICE IN WONDERLAND, TRON and DISNEY’S A CHRISTMAS CAROL, and animated gems THE PRINCESS AND THE FROG, BEAUTY AND THE BEAST, PONYO and the TOY STORY trilogy.

Disney?Pixar’s TOY STORY and TOY STORY 2 return to the big screen in an exciting double feature Oct. 2, 2009—this time in Disney Digital 3D™.

They’re toys, they talk—at least when people aren’t around—and they’re back… celebrating the return of the “Toy Story” franchise—this time in Disney Digital 3D™! TOY STORY, the film that started it all, takes moviegoers back to that fantastic fun-filled journey, viewed mostly through the eyes of two rival toys— Woody (voice of TOM HANKS), the lanky, likable cowboy, and Buzz Lightyear (voice of TIM ALLEN), the fearless space ranger. The comically-mismatched duo eventually learn to put aside their differences when circumstances separate them from their owner Andy and they find themselves on a hilarious adventure-filled mission where the only way they can survive is to form an uneasy alliance.

Disney•Pixar’s TOY STORY 2 picks up as Andy heads off to Cowboy Camp, leaving his toys to their own devices. Things shift into high gear when an obsessive toy collector named Al McWhiggin (voice of WAYNE KNIGHT), owner of Al's Toy Barn, kidnaps Woody (voice of TOM HANKS). At Al's apartment, Woody discovers that he is a highly valued collectible from a 1950s TV show called “Woody's Roundup," and he meets the other prized toys from that show - Jessie the cowgirl (voice of JOAN CUSACK), Bullseye the horse and Stinky Pete the Prospector (voice of KELSEY GRAMMER). Back at the scene of the crime, Buzz Lightyear (voice of TIM ALLEN) and the gang from Andy's room – Mr. Potato Head (voice of DON RICKLES), Slinky Dog (voice of JIM VARNEY), Rex (voice of WALLACE SHAWN) and Hamm (voice of JOHN RATZENBERGER) – spring into action to rescue their pal from winding up as a museum piece. The toys get into one predicament after another in their daring race to get Woody home before Andy returns.

DISNEY’S A CHRISTMAS CAROL, a multi-sensory thrill ride re-envisioned by Academy Award®-winning filmmaker Robert Zemeckis, captures the fantastical essence of the classic Dickens tale in a groundbreaking 3D motion picture event. Ebenezer Scrooge (JIM CARREY) begins the Christmas holiday with his usual miserly contempt, barking at his faithful clerk (GARY OLDMAN) and his cheery nephew (COLIN FIRTH). But when the ghosts of Christmas Past, Present and Yet to Come take him on an eye-opening journey revealing truths Old Scrooge is reluctant to face, he must open his heart to undo years of ill will before it’s too late. Opens in theaters nationwide on Nov. 6, 2009.

THE PRINCESS AND THE FROG

Walt Disney Animation Studios presents the musical THE PRINCESS AND THE FROG, an animated comedy set in the great city of New Orleans. From the creators of “The Little Mermaid” and “Aladdin” comes a modern twist on a classic tale, featuring a beautiful girl named Tiana (ANIKA NONI ROSE), a frog prince who desperately wants to be human again, and a fateful kiss that leads them both on a hilarious adventure through the mystical bayous of Louisiana. THE PRINCESS AND THE FROG marks the return to hand-drawn animation from the revered team of John Musker and Ron Clements, with music by Oscar®-winning composer Randy Newman. Opens on November 25, 2009 in NY and LA, and on December 11, 2009 nationwide.

PREP & LANDING is ABC’s first television special produced by Walt Disney Animation Studios. The half-hour holiday special reveals the never-before-told tale of an elite unit of Elves known as Prep & Landing. Every Christmas Eve, this high-tech organization ensures that homes around the world are properly prepared for a visit from the Big Guy (aka Santa Claus). After working tirelessly on Prep & Landing for 227 years, an elf named Wayne (voice of Dave Foley) is upset when he doesn’t receive an expected promotion to be the Director of Naughty List Intelligence. Instead, Magee (voice of Sarah Chalke), the North Pole Christmas Eve Command Center Coordinator (NPCECCC for short), partners Wayne with Lanny (voice of Derek Richardson), an idealistic rookie who has an undying enthusiasm for Christmas. During their Christmas Eve mission, Wayne and Lanny encounter unexpected challenges that push them to their limits.

BEAUTY AND THE BEAST (In Disney Digital 3D™)

Walt Disney Pictures’ magical animated classic BEAUTY AND THE BEAST returns to the big screen in Disney Digital 3D™, introducing a whole new generation to the Disney classic with stunning new 3D imagery. Opening Feb. 12, 2010, the film captures the fantastic journey of Belle (voice of PAIGE O’HARA), a bright and beautiful young woman who’s taken prisoner by a hideous beast (voice of ROBBY BENSON) in his castle. Despite her precarious situation, Belle befriends the castle’s enchanted staff—a teapot, a candelabra and a mantel clock, among others—and ultimately learns to see beneath the Beast’s exterior to discover the heart and soul of a prince. Featuring unforgettable music by Howard Ashman and Alan Menken, and an enormously talented vocal ensemble, BEAUTY AND THE BEAST was the first—and only—animated feature to receive a Best Picture nomination from the Academy of Motion Picture Arts and Sciences.

From Walt Disney Pictures and visionary director Tim Burton comes an epic 3D fantasy adventure ALICE IN WONDERLAND, a magical and imaginative twist on some of the most beloved stories of all time. JOHNNY DEPP stars as the Mad Hatter and MIA WASIKOWSKA as 19-year-old Alice, who returns to the whimsical world she first encountered as a young girl, reuniting with her childhood friends: the White Rabbit, Tweedledee and Tweedledum, the Dormouse, the Caterpillar, the Cheshire Cat, and of course, the Mad Hatter. Alice embarks on a fantastical journey to find her true destiny and end the Red Queen’s reign of terror. The all-star cast also includes ANNE HATHAWAY, HELENA BONHAM CARTER and CRISPIN GLOVER; Linda Woolverton wrote the screenplay. Capturing the wonder of Lewis Carroll’s beloved “Alice’s Adventures in Wonderland” (1865) and “Through the Looking-Glass” (1871) with stunning, avant-garde visuals and the most charismatic characters in literary history, ALICE IN WONDERLAND comes to the big screen in Disney Digital 3D™ on March 5, 2010.

The creators of the beloved “Toy Story” films re-open the toy box and bring moviegoers back to the delightful world of Woody, Buzz and our favorite gang of toy characters in TOY STORY 3. Lee Unkrich (co-director of “Toy Story 2” and “Finding Nemo”) directs this highly anticipated film, and Michael Arndt, the Academy Award®-winning screenwriter of “Little Miss Sunshine,” brings his unique talents and comedic sensibilities to the proceedings. TOY STORY 3 comes to theaters nationwide in Disney Digital 3D™ on June 18, 2010.

TRON is a 3D high-tech adventure set in a digital world that’s unlike anything ever captured on the big screen. Sam Flynn (GARRETT HEDLUND), the tech-savvy 27-year-old son of Kevin Flynn (JEFF BRIDGES), looks into his father’s disappearance and finds himself pulled into the same world of fierce programs and gladiatorial games where his father has been living for 25 years. Along with Kevin’s loyal confidant (OLIVIA WILDE), father and son embark on a life-and-death journey across a visually-stunning cyber universe that has become far more advanced and exceedingly dangerous.

Sam Flynn sounds too much like the Jet Bradley son of Alan Bradley (aka Tron) plot from the Tron 2.0 videogame. Why do they always have to pull bring the kid into it? I was content with seeing an older Kevin Flynn going back to the Game Grid.

Want to find out more about the films on the horizon.

Are the re-releases exclusive to the US??

I think a Disney-Digital-3D re-release of "Who Framed Roger Rabbit" would be neat.