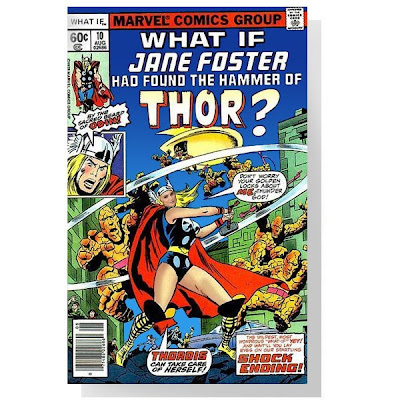 Well I can tell this script is definitely different than the version I read...

If you haven't heard, Natalie Portman has been cast in the new Marvel Studios "Thor" as Jane Foster. So now that I've heard that I know that the draft I read has been changed dramatically. I can only hope that it's still a great script, as the one I read is one of the 5 Best Scripts Never Made. That version was set in Asgard and a cold, cruel, blood drenched world of vikings. I loved that story. It was pitch perfect "The Mighty Thor" without trying to cast him as a superhero in tights, much closer to the Walt Simonson stories of the 80's. This new take is a balanced one I hope. The change to a modern world was done for the sake of making sure Thor could appear in The Avengers film and while I don't mind him appearing in it, I'm uncomfortable with changing a brilliant tale simply for the sake of synergy and marketing.

Still, Natalie is a great actress; especially when given a good script (hear that, George?), and Kenneth Branagh is assembling a fantastic cast.

By Odin's Beard, I'm crossing my fingers that it all comes together...
Posted by Honor Hunter at 1:07 PM

Natalie is definitely one of my favorite actresses and I'm excited to see what she brings to the movie. I never really got into Thor, but I do love mythology so hopefully this will be an excellent addition to Marvel's Avengers films.

How is Mola Rom doing, Jack?

Nah, I'd take Portman over Knightley any day.

Although I'd take Lucy Pinder over both.

All three wouldn't have you Anonymous.

how could she give a good performance with that terrible script? It sounded waaaay too contrived and fake because of the bs she had to say.

Natalie Portman is one of my absolute favorite young actresses and it always irritates me when I hear people complain about her not having any talent just because of the Star Wars prequels. Lucas did a bang-up job of making many talented actors look bad in those films, so it's not like she was the only one.

As for the script, I'm really not sure how much they've decided to revise it. I've heard rumblings that earth will only be featured in the final act, and I've heard others claim that the script has been re-written from the ground up. The simple truth is that no one simply knows at this point.

Whatever the situation, I'm not too worried. Between the talent attached to this, and how Marvel handled their first two-solo films I'm pretty sure we've got a decent film on our hands either way.