An Offer You Can't Refuse... 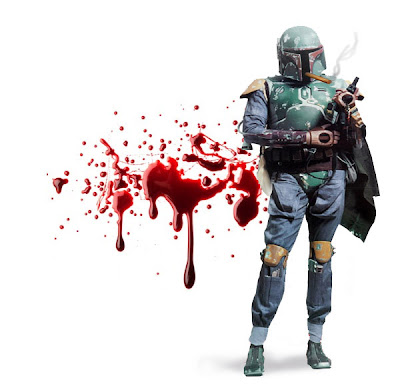 There's a lot of buzz going round now about the live-action Star Wars television series being in pre production down under...

Now it may be. I know that Lucas started loading up on writers a year or so ago and he's supposedly now hired some Australian writers to add to his gathering. He's working on having a full season of scripts ready before he starts shooting. The good news on this is that he's taken the Executive Producer route, which means he won't be doing the day to day stuff. In the right hands, this could turn into something really nice. Of course, in the wrong hands it'll be a car crash that people can't look away from.

The pitch that Lucas gave it sounds intriguing to say the least. He said it was "Deadwood meets the Sopranos in Space" which could give you an interesting tone to the entire show. Everyone was expecting this to premiere in 2009, but since it hasn't even started lensing I'd say that is next to impossible. Even if they get up and shooting by fall, you wouldn't see it until at least the fall of 2010 at the earliest. And from what I'm hearing that isn't even a likelihood with Lucas working on his "Red Tails" project and a couple other commitments. So the earliest we will see the Star Wars television show, barring a change in schedule, is early 2011. That's the earliest... not when it's most likely to arrive. My best hunch would say fall of 2011 is more likely with a worst case scenario being 2012.

But who knows? Maybe by then Lucas will be so disinterested in Star Wars that he will have handed it off to others to deal with. Or maybe he'll finally decide to sell the company(not likely, but not improbable) to a studio hungry for those characters(Fox or Disney, perhaps?). Either way, it's going to be a while before it's done and ready to be shown. George Lucas is putting all the money up for this so he owns it outright. Once he's got the series in the can or at least close to it he will go to the networks and see who the best partner for it is. I don't think Cartoon Network has a good shot at this one even though they've gone into live-action. I feel that this series will be too rich for them. It's going to take a big network like CBS, NBC, Fox or dare I say ABC? Then there's the other route, presuming that it's as dark as the shows he comparing it to. HBO or some other cable network could be in the offering, but I believe the size of their audience might be less than he wants for this show because it's got to stick around a long time. As in 100 episodes, at least. That's at least four to five season if you count that most network series are 22 episodes a season.

But I can tell you, I'm really curious to see the first ads for this one. It should be interesting seeing what happens over the next year as Lucasfilm ramps up to productions.

I remember the days when this blog used to focus on Disney Parks and Imageneering...

Then you don't remember this blog at all.

Great, you just gave us another reason that George Lucas has forgot the essence of Star Wars, "Sopranos meets Deadwood," the guy must really be desperate to ruin his own creation further and further and won't stop till he's killed it, which he already has as of now.

A Deadwood in space is what the original Star Wars was. Adding a 'Sopranos' to it seems fitting with involving bounty hunters and politics...

NOOO! If he sells it at all dont sell to disney! I think they will ruin the franchise and would have been better off with George Lucas.

You think Disney would treat it as he has? At least they'd probably hire good writers and protect the characters. They've shown a good history of protecting their characters. Now Fox on the other hand? Look at how they've handled the Alien properties. The Pretator properties. The Marvel adaptions of late?

Yeah I miss this blog being just Disney. honor Hunter please stop bringing up your personal upsets about Lucas, it's just agonizing!!

This blog has always had stuff about Star Wars and Indiana Jones. You people have selective amnesia. If you don't want to read his post about Lucas and his work don't.

Besides, he sounded kind of upbeat about this project, I don't think he was that down on it. If you want a blog that only focuses on what you want then I suggest you create one. This is his blog, his opinion.

I assume Honor will post Disney-related stuff when he has it. Can't force it...particularly with Disney being rather tight-lipped and in a state of flux these days (economy...what else.)

Don't always agree with you, Honor, but I do enjoy your take on things outside of the Disney world.