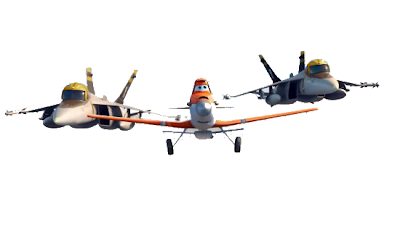 The trailer for "Planes" has finally been released...

The teaser released a few weeks ago was more of a montage of the scenes with some nice music laid down to give it some ambiance.  It didn't try to tell any of the story.  The animation itself is quite impressive, but the story looks like a flight we've been on before.  In a car.

It looks like a rehash of the basic "Cars" story, except with planes instead of automobiles.  Instead of the racing car "Lightning McQueen" we have the racing plane "Dusty."  Instead of Mater, we have the lovable Gee Bee plane to guide him.  It sounds like they're going back to the well with this one, but I do know that the Bothans that have seen it say it's impressive enough that John Lasseter felt it worthy of a limited theatrical release.  And the male demographic will love it.

And if this flies we can look forward to trains...
Posted by Honor Hunter at 7:15 PM

Klay Hall said in an interview that he was originally supposed to direct Trains, a Dumbo spin-off starring Casey Jr but the project was cancelled.

So, perhaps we won't be getting Trains after all? Do you know anything about this?

Do you know which vehicle-movie will be next after the Planes trilogy?

Well, this summary makes me less than trilled. It reminds me too much of all the nasty Disney direct-to-video sequels they churned out. Still, I'll wait and see what the reviews are like after it's come to theaters before passing too harsh a judgement just yet.