From Iron Man To Man Of Bronze... 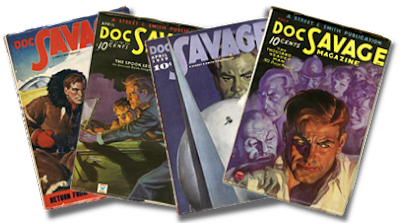 For me, at least.  If you follow Blue Sky regularly you know I'm a big "Doc Savage" fan.  And I've wanted to see an adaptation of these classic pulp characters for what feels like eternity.  And now it's here.  Officially.

Shane Black signed on to direct and co-write this almost four years ago.  But the project stalled after a year of development.  But a blessing happened soon after that.  Within a year of that project being put on hold, Kevin Feige and his Marvel Suits were looking for a director to film the next Iron Man sequel.  And Black's name came up.

He fit the Marvel mode.  Someone that was talented, hungry and cheap.  That's how they get you.  But it's a hell of a job to take.  Super hero films are to this decade what the buddy films were to the 80's.  And Shane Black was the founder of those type of films.  I think he knew that this was a chance to show he could deliver a big hit.  And that would give the Suits over at Sony the testicular fortitude to green light what might be a $150-200 million dollar crap shoot.

And now we have "Iron Man 3" with it's boxoffice of $700+ million dollars.  Money makes the world go around.  And in the film business, money makes wheels move quickly.  It's the oil to the engine.  So today, The Wrap gave us the news that Sony has green lit the film (The Hollywood Reporter's Heat Vision also verifies).  And now Sony Pictures has issued the official press release:

CULVER CITY, Calif., May 7, 2013 –Sony Pictures Entertainment has closed its deal with Shane Black to co-write and direct Doc Savage, and Black is eyeing it as his next film, it was announced today by Doug Belgrad, president of Columbia Pictures, and Hannah Minghella, president of Production for the studio.  Black co-wrote the screenplay with Anthony Bagarozzi and Charles Mondry, based on the hero of pulp novels, films, and comic books.  Neal H. Moritz is producing the project with Ori Marmur through his Original Film banner. Michael Usland will also serve as a producer on the film. Commenting on the announcement, Minghella said, “We couldn’t be more excited to be building a franchise from the ground up with Shane and this team.  Shane and Neal have a fantastic understanding of the character and a great take on the material and we can’t wait to get this production up and running.” One of the most popular characters of the pulps of the 1930s and 40s, Doc Savage was also popularized on radio, film and television. He is a scientist, physician, adventurer, inventor, explorer and researcher. He has been trained since birth to be nearly superhuman in every way, with outstanding strength, a photographic memory, and vast knowledge and intelligence. He uses his skills and powers to punish evil wherever in the world he finds it. Black most recently co-wrote and directed Iron Man 3 which has grossed more than $700 million since opening a little more than one week ago. He previously wrote and directed Kiss Kiss Bang Bang. Sam Dickerman and Lauren Abrahams are overseeing the title for Columbia Pictures along with Minghella. Black is represented by David Greenblatt, WME and his attorney Alan Hergott.

So now we have to wait and hear who is cast in these parts.  Doc Savage is a particularly hard one, because he's supposed to be a perfect human specimen: physical and mental.  So they are going to need an actor that can convey the action, but also the depth.  Now, I know he's no thespian, but if Arnold Schwarzenegger had the physique of his body in "Predator", he'd look perfect with blonde hair and a tanned body.  Unfortunately, he doesn't.  So the casting call will have to go out and find someone else.

Some people have suggested Dwayne Johnson, whom I've enjoyed in films like "The Rundown" and a few others.  He has charisma, but I don't see him as Doc.  Of course, I'll trust Shane Black.  Did any of you see "Kiss, Kiss, Bang, Bang" before?  I expect that he knows what he needs in an actor, and the box office of this Marvel film will go a long way toward giving him the creative freedom to do what he wants.  I'm so there.  The script is apparently a go.  So the film could start pre-production very soon.  That means we could be going back to the 30's/40's within a couple years.  That could be 2015.