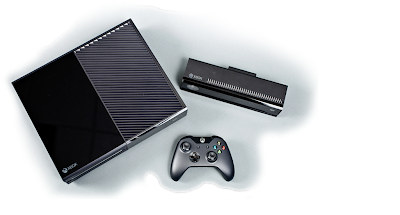 So Micro$oft introduced their successor to the XBox 360...

And it's not called the XBox 720 like so many gaming geeks expected.  It's called the XBox One.  One?  Really, didn't they already have a one?  That means the fourth version of this will be called, what?  The XBox Two?  Confusing.  I guess they're going back to square one and starting fresh.  So now we know the competition that the PS4 will have.  But could they have made it look better than a late 70's VCR?

But it appears that the guys up in Redmond want to also become like Netflix.  Hulu has tried to be a Netflix competitor.  Amazon has started their own streaming service, HBO has hinted that HBO GO might eventually be a Netflix like service and now, it appears that the XBox Live service plans to have original content as well.  And they've lined up the Babe Ruth of film to start it off.

And not only him, but the television series that he'll produce for the XBox Live: Halo.  That's right, Halo is finally going to be seen in live-action.  Just as a television show, not a film.  Spielberg will be executive producing the series.  Not much information is available about the show other than the fact that it'll be exclusive to XBox Live.

There are a lot of competing platforms out there competing for your eyeballs.  It's creating an incredible amount of fragmentation in the marketplace.  The result is many more markets with smaller audiences.  Long gone is the night when a network would have fifty percent of the viewing audience.  Today, if you get ten to twenty it's huge.  And it's only going to get more fragmented.  But that means more choice, and choice is good.  And now with XBox One, you have another choice.

And with the Halo series, you'll have another...
Posted by Honor Hunter at 12:09 PM

Question, do you have to have a XBox to watch/subscribe to XBox Live? If so, I predict Halo: the Series will be DOA. Not enough people are going to pay $400 to watch one tv show, of anything it will just continue to lush people to torrent it. But I give this show one, maybe two short seasons tops before the cost outweighs the value.

That's right. You said it.