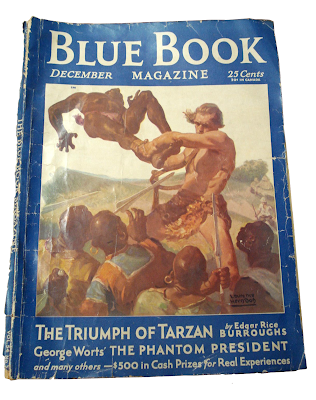 It's amazing how the past can sometimes take control of the present...

Or predict the future.  Because that's what happened between the 1930's to the 1950's.  Much of the literature or films of these decades greatly influenced what we go to the theaters to see, or what we turn on the television to watch.  Now, I'm talking specifically about a certain type of literature (pulp magazines & comics) and a certain kind of film (serials).

Imagine some of the biggest hits in the last two decades, or even three decades and what do you come up with?  Star Wars?  It's a Saturday morning serial, especially "The Empire Strikes Back", as it's a pure matinee picture.  Raiders of the Lost Ark?  It's cut from the mold of old serials like "Spy Smasher" or "Zorro's Black Whip" among others.  Even it has imitators like "The Mummy" that play into the serial/pulp vein of pictures.  What is Disney's big tent pole picture this summer?  "The Lone Ranger" which is based on pulp stories that turned into serials like "The Lone Ranger" and "The Lone Ranger Rides Again" to the classic television series.

And then there are the pulp stories like "Doc Savage" that is walking right out of a tattered, old pulp magazine.  There have been some abortive attempts like "The Shadow" which has the correct look, but the wrong feel for the character.  And there have been efforts to bring him back, specifically, Sam Raimi a few years back before he got "Spider-Man" off the ground.  Disney's own "John Carter of Mars", which sadly didn't connect properly with audiences, comes from the Edgar Rice Burroughs stories printed in these old pulps.  Most people like to make fun of this that have never read the novels, or they simply forget because of Burroughs more famous pulp creation: Tarzan.

And comic books seem to be the biggest beneficiary of this resurgence.  There have been bad attempts at this over the decades, but around the end of the last century we started getting films that tapped the right fan artery.  Part of this was because Suit in charge were beginning to be the generation that read these comics so the stories were more authentic, and second, the introduction of computer graphics made it possible to create believable worlds; something that wasn't achievable a decade earlier.  A film of the Justice League or Avengers a couple of decades ago would have looked horrible, but with the help of CG and a script by Joss Whedon, look at what can be achieved?  A Justice League picture right now sounds like a monster waiting to be unleashed, not a film to be humiliatingly tucked away in a vault.

But a great deal of what you see on the silver screen today has been born from the DNA of these mediums.  And we're beginning o see more and more of them.  Expect if Doc Savage succeeds for The Shadow to be quickly green lit into production.  Studio Suits will go mining the pages of dingy pulps looking for the next character that they can exploit.  Something like The Spider could be the next one to go, or a less known pulp hero like Operator 5 or Secret Agent X.  If Warner Bros. wants to get on the band wagon, all they have to do is look through their DC Comics characters for "Spy Smasher", a little character they bought from Whiz Comics years ago.  He's the star of an incredibly entertaining serial by the same name that is utterly dear to me.

Not everything will be a hit.  For every Star Wars, there is a "Sky Captain and the World of Tomorrow" that doesn't perform.  Or a "Rocketeer" that disappoints.  But even that film has developed a growing following as it's gotten older.  It's aged like wine to the point where the Mouse is thinking of rebooting it for the next generation.  Everything old is new again, or can be.  If you were a fan of "The Clone Wars" then you might not know that you were watching a serial.  Everything about that show flows back to the old Flash Gordon serials, from the action to the opening exposition setting up what's to come.

Yes, pulp/serials/comics changed the world.  At least the one we pay money for a ticket to see.  They take us away from the boring, drab world we live in to take us to a world where good will win, and it will do so with style and presence.  It's a place where danger lurks around every corner, but fun pervades every bit of atmosphere.  Within this world we can escape the lives we live, to experience something missing from our day to day journeys.

Now sit back in your chair at that theater and watch these old tales live again...
Posted by Honor Hunter at 12:08 AM

Dont' forget the giant critical and commercial flop john carter. That film is written and directed so bad, with zero human component--leaving the audience no way to connect to the film. Hence it turned into a $200 million write off for Disney.

He did mention John Carter in the third paragraph.

And I disagree with you. I loved the film. Hated the marketing of it.

But the film itself is a fun adventure.

"It's a place where danger lurks around every corner, but fun pervades every bit of atmosphere."

That's what was sorely lacking in the Star Wars prequels, I hope they get it right in Episode VII.

Oops. You're correct. But the film was still awful, and the world hated it. Bad marketing or not--the film was a dog, which is THE REASON it didn't "connect with audiences."