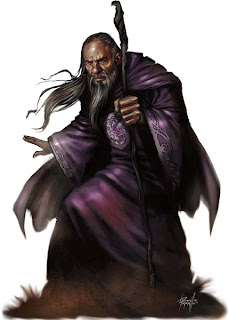 A war is about to break out...

Last week it was announced that Warner Bros. would be making an adaptation of the role playing game: "Dungeons & Dragons" for the big screen with writer David Leslie Johnson.  By the very next day, Hasbro, who now owns Wizards of the Coast (owner of D&D) fired off had lawyers readying their arrows.  It seams they're developing their own Dungeons & Dragons film and don't like the idea of a competing one.

The case is mired in legalize, but it comes down to this:  Courtney Solomon, who made the stinker of a film a decade+ ago, has the rights to the name Dungeons & Dragons, but none of the adventure campaigns, worlds, modules or novels.  Hasbro/Wizards owns everything else, just not the actual name.  The rights ended up being settled in an arbitration hearing after Hasbro bought the company with the result being that Solomon did have the use of the name, but everything else Hasbro can use for whatever it wants.

That's apparently not enough, as Hasbro now intends to get lawyers involved, even after arbitration to try and secure the name back.  It believes that the value of the stories it makes would be greatly diminished with the D&D logo upon it.  Even though they have screenwriter Chris Morgan (Wanted, Fast & Furious 2 - infinity) making his directorial debut.

But I see a possibility to create two separate worlds, or multiple worlds here.  Sure, Dungeons & Dragons is better known, but not by a great deal of the movie going public.  If they have a compelling script with interesting characters, inspired casting, a good budget and smart marketing, they potentially have the opportunity for a major new franchise(s).  There are many worlds they can explore if they choose to.

The Dragonlance world alone should be a place you could fill a trilogy of films (not like the mediocre "Dragonlance: Dragons of Autumn Twilight" animated movie).  Then there is the expansive World of Greyhawk with its great theming and adventures, the moody alternate universe of Ravenloft, and the gritty lands of the Forgotten Realms they could mine for stories.  And who says it has to be for just film?  What about a series on HBO or Netflix, or Hulu?  How about a mini-series/limited series on Amazon or A&E.  Perhaps a television film/series on one of the networks/cable?

Like the game, the worlds they hold are open to endless adventures...
Posted by Honor Hunter at 10:32 AM