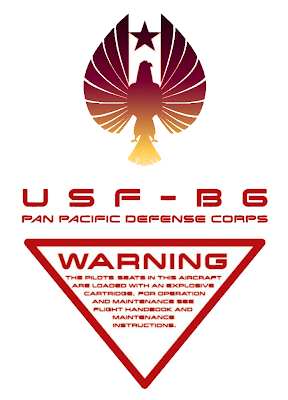 Boy, does this look like a young boy's dream or what?  "Pacific Rim" is shaping up to be what kids have fantasized about playing with action figures for decades.  And from the buzz it sounds like Legendary Entertainment's Suits, particularly, head geek Thomas Tull, have made a friend for life.

Perhaps Guillermo is hoping that if he makes Warner/Legendary a mountain of cash, they'll give him a mountain?  As in buy the rights to his mountain over at Universal.  His opus, his dream is to make "At The Mountains Of Madness" since forever.  And it would have been done over at Universal with James Cameron producing and Tom Cruise starring, but the Uni Suits didn't want a R rated $100 million dollar picture.

If this film is a success then perhaps Universal will let him make that picture.  Or maybe Legendary will buy the rights to the project and let him have it as a gift for what he's done for them?  And while we're at it, maybe Alan Horn and the Disney Suits will finally bite the bullet and green light his "Haunted Mansion" reboot?  Now that would be a project I and many other fans have wanted to see.

It could all be riding on a bunch of giant robots and monsters...
Posted by Honor Hunter at 11:50 AM

Still not sold. Where's the heart? Where's the humor? All I see are night shots of monsters vs. robots with slightly familiar looking actors expressing no emotion. Wish I got more from this but, I'm not. And I LOVE Guillermo Del Toro. Top bad.