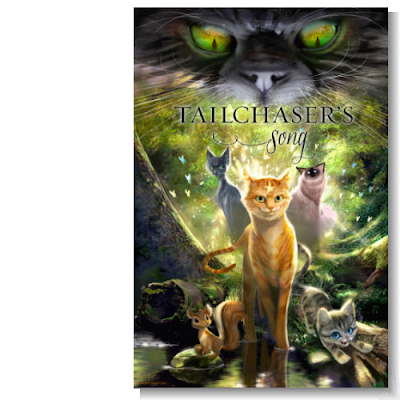 If you're a fan of classic fantasy stories then this is for you...

That poster you see is the teaser for the upcoming animated film adaptation of Tad Willaims' "Tailchaser's Song".  It's an epic fantasy that is told through the eyes of a society of cats.  If you're rolling your eyes, please don't.  It's an enchanting tail, um tale about a particular cat that has to go on a quest to find out the who is killing cats.  It's sweet and haunting, involving cat gods, strange worlds and bizarre adventures.  Crazy, beautiful stuff.  It's been described as "Watership Down with cats", but that doesn't do the story justice.

Animetropolis Productions along with IDA and EFG-Renascence are in the process of animating it right now, so it'll probably be out around 2015, although there's no official release date yet.  But if the animation is good then this film could be a great film.  They already have great source material that is epic.

Not every animated film can start off with a great story, but this one does/can...

Well, I'm not familiar with this book, but I'm always excited to hear about new potentially-good animated films. Hopefully the creators treat the story well and this ends up being an excellent family-friendly fantasy.

That looks terrible, and knowing that whoever made the flop rise of the guardians puts the nail in the coffin. The poster reminds me of that awful owl cartoon out a few years ago/

If they are faithful to the book it'll be a great film. The question I want to know is who is writing it?