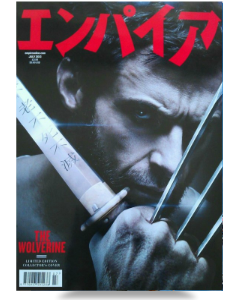 The special issue of Empire magazine is out...

It's got a swanky cool picture of Hugh Jackman in character from the film "The Wolverine" for the cover.  Pretty nice pose.  I really want this film to be good, but the trailers so far haven't given a great vibe.  Despite the fact that it has a great screenwriter in Christopher MacQuarrie, terrific source material in the Frank Miller/Chris Claremont mini-series, and a top level director in James Mangold, the trailer so far don't convey the classic tale of Logan in the Land of the Rising Sun.

Maybe Fox hired the people that marketed "John Carter" for Disney...
Posted by Honor Hunter at 10:32 AM

I have to agree that the marketing for this films is leaving a lot to be desired. I'm not excited about it, although I want to be. Perhaps if I have low enough expectations, it'll be able to exceed them...?