Child Of The Mansion... 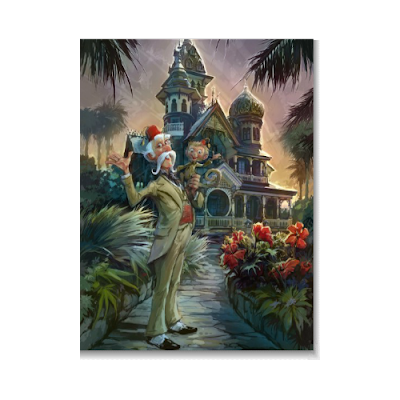 Today marks the official end of the Extreme Expansion and the opening of the final piece of it...

Mystic Manor opens today in Hong Kong Disneyland.  The attraction, which is the result of planning for the Haunted Mansion in China, is a layered hybrid of taking the lessons learned from dealing with unique cultural perceptions.  The views on ghosts in Chinese culture represented a challenge to the Imagineers designing the initial phase of the Hong Kong Chinese version of the popular attraction.  While, the ride is not officially a clone of the classic ride, there are no plans for a version of the original at the park because of the connective DNA that they share.

The guest riding the attraction since it soft opened yesterday, will travel along a mansion owned by Lord Henry Mystic, purveyor of fine antiques of his adventures around the world.  As a member of the Society of Explorers and Adventurers, he's collected a large collection of artifacts that he's set about the manor to show off to guest to his home.  The result is a "Jumanji" like experience filled with clever displays of magical mischief.  Danny Elfman's score does a great job creating the atmosphere of slightly scary, while still having a subtle tone of humor.  If you want to read more about the area, Alain's coverage of the opening over at Disney and More has excellent analysis, pics and videos.

The attraction and it's lushly themed Mystic Point is perhaps the best layered in the park.  It's narrative story is pure Disney, and this will be the first of several attractions that will hopefully give HKDL it's own identity, to separate it out from the other sibling parks.  The Imagineers have been working on several other projects that the Suits will try to present to their Chinese partners in the near future.  But don't expect anything big for the next few years as the park gets guests to experience the fruits of expansion.  There is plenty of land for more Disney themed experiences in the areas surrounding the new openings.  And right now the Imagineers are focusing further into inland China.

Shanghai is a much bigger task...
Posted by Honor Hunter at 2:05 AM

I saw this ride on YouTube via MiceAge. What a fabulous and fun adventure! The spinning room is the best and that little monkey is too cute!! Doubtful the US will ever get anything like this but it is nice sometimes for the parks to have their own rides. Too bad I will probably never experience it in real life!!

Had the chance to finally visit Hong Kong Disneyland last month. Unfortunately Mystic Manor wasn't open yet, but Grizzly Gulch was amazing! And from everything I've seen Mystic Manor is even better. I can't wait to get back to see it for myself.